Journeys Goes Along for the Ride with Neil Young 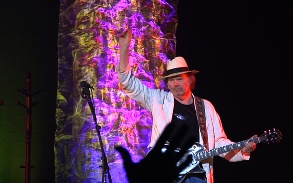 There are moments in Jonathan Demme's new documentary, Neil Young Journeys, when the saying "too close for comfort" comes to mind. The camera drops to focus on the lower half of Young's face mid-song, staying close enough and long enough that it's possible to identify color patterns of browns and grays in the stubble on his chin, to notice what looks to be bridgework on his teeth, to see the spit fly.

In those scenes, what he is singing recedes, upstaged by the stubble, spit and the rest. Given the influential singer-songwriter's always potent and poetic lyrics and that haunting minor key he long ago settled into, it is a surprising turn. It feels like an invasion, and an uncomfortable one at that. That closeness - between the veteran director, a seminal artist in his own right, and one of the great songwriters of recent generations - is what defines and at times undermines Journeys. Young's almost mystical musicianship is what saves it.

The documentary is built around the singer's final performances in a solo tour that wrapped at Toronto's historic Massey Hall in May of last year. It is a nearly silent night except for the music. Everything is stripped down to the bone, little conversation with the crowd, and Young quiet as he moves between instruments and song.

The set list, a mix of old and new, is a rarefied collection reflecting the rocker's eclectic stylistic range. Young is always a singular force onstage, where he is a master of so much - a harmonica that weeps, an electric guitar that wails, an acoustic that whispers, an organ that grinds and soars - and that strength provides the spine of the film.

But Demme is interested in a few other things. Journeys slips out for a bit of fresh air to chronicle the drive the director took with Young from the singer's hometown of Omemee, Ontario, to Massey Hall. The wheels are classic, a 1956 Crown Victoria, and the 66-year-old looks as if he's showing an old friend the sights.

This is the third concert film Demme has done with the multiple Grammy winner, who wrote the Oscar-nominated title song for the director's 1993 AIDS drama Philadelphia. Documentaries in general have always seemed passion projects for a director best known for his narrative work on films such as his Oscar-winning The Silence of the Lambs and more recently the critically acclaimed Rachel Getting Married.

With Young, it is becoming a long conversation as well as an extraordinary archive of the singer's performances. It was better in the beginning - 2006's "Neil Young: Heart of Gold," anchored by an emotional Nashville concert a few months after the artist survived a brain aneurysm. In 2010, "Neil Young Trunk Show" featured performances and a lot of packing and unpacking of the objects that accompany him on tour. This film is all about the instruments, from Young's voice to the ones he plays. When the camera is not in the singer's face, cinematographer Declan Quinn makes the scenes look like portraiture, dark silhouettes of Young lost in the music, close-ups of the harmonica resting in a glass of water.

On the road to Massey Hall, the mood is light. It is a brilliantly sunny day as Young and the filmmaker make their way through the Canadian countryside. The artist fills in childhood memories: his favorite fishing spot; the school named after his late father, journalist-novelist Scott Young; the land where the family home once stood. The conversation stays very much on the surface, no deep reflections, just the sense that he is content.

Back onstage, he is afire. In a worn white straw fedora, loose linen jacket and jeans, he powers through classics such as "My, My, Hey Hey (Out of the Blue)," "Ohio," "Love and War." Then he goes impossibly soft for the ode to a child, "Leia." And "Helpless" is made more intimate having just driven with him through the "north Ontario ... all my changes were there." The show and the film end with an electrifying version of "Walk With Me," Young pacing the stage, guitar screaming before it cuts to silence, broken seconds later by wild applause. This alone makes Journeys worth taking.