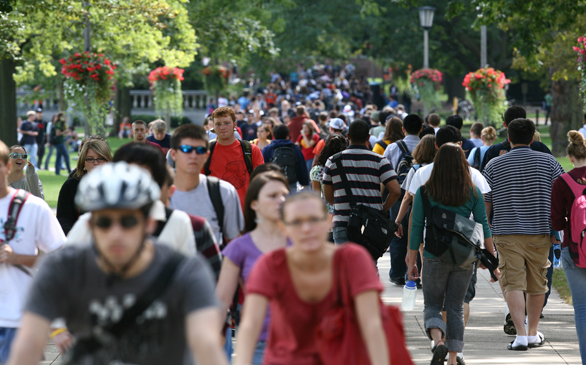 Congress put a halt to the student loan rate increase, which is a win for collegiate students.
(Credit: E. Jason Wambsgans/Chicago Tribune/MCT)

Congress, in a rare display of bipartisanship, on Friday sent to President Barack Obama a roughly $105 billion transportation bill that lawmakers from both parties touted as perhaps the largest jobs measure of the year.

The measure also would avert a doubling of interest rates for millions of college student loans that was threatened to hit Sunday.

"The American people finally will have a jobs bill from this Congress," said Eleanor Holmes Norton, a Democrat who is Washington, D.C.'s delegate to the House.

The first major transportation bill since 2005, the legislation would keep highway and transit spending at current levels through the end of fiscal year 2014. It includes an expansion of a federal loan program sought by a group of U.S. mayors to fast-track bus and rail projects in traffic-choked regions.

The House approved the bill by a lopsided 373-52 vote, demonstrating the power of pothole politics. The Senate approved it 74-19.

The bill would provide financial incentives to states that crack down on distracted driving, require ignition interlock devices for DUI offenders and establish graduated licensing programs that restrict teenagers' driving privileges. It also would impose new safety rules on interstate passenger buses in response to a number of high-profile tour bus crashes.

"Do not give up hope,'' Sen. Barbara Boxer, D-Calif., chairwoman of the Senate Environment and Public Works Committee, said, calling the bill's passage evidence "that we can work together."

The bill's passage came only after lawmakers once again faced deadlines - a shutdown of the highway program Saturday and a doubling of student interest loan rates Sunday. Lawmakers also did something unusual for this Congress: They compromised.

Republicans, in the face of White House opposition, dropped an effort to use the bill to try to advance the controversial Keystone XL pipeline. Environmentalists said the bill would weaken environmental reviews in order to satisfy GOP calls for speedier project approvals.

"The dramatic reforms in this measure will get projects moving by cutting the red tape that delays projects across the country and drives up construction costs," said House Transportation Committee Chairman John Mica, R-Fla.

Democrats made concessions that are likely to lead to less funding for bicycle, pedestrian and beautification projects. Republican leaders, despite opposition within their conservative ranks, agreed to find money from other than the gas tax to fund transportation projects, such as higher employer premiums to the pension insurance agency, the Pension Benefit Guaranty Corp. All the no votes were cast by Republicans.

"It has been obvious for many years that the current gasoline tax is not enough to meet the desire of Congress to spend on transportation," said Ryan Alexander, president of the watchdog Taxpayers for Common Sense, accusing lawmakers of relying on "budgetary smoke and mirrors" to fund projects.

The 599-page bill, which could be one of the last major pieces of legislation to pass Congress before the election, includes other measures, from targeting the Asian carp, an invasive species threatening the Great Lakes, to steering 80 percent of the fines that will be paid by BP - up to $21 billion by one estimate -from the 2010 gulf oil spill to the Gulf Coast to help restore coastal ecosystems and rebuild economies in the region.

The bill also includes a measure to renew the federal flood insurance program. Congressional leaders paved the way for the bill's approval after dropping a measure, opposed by lawmakers from California to Pennsylvania, that would have forced millions of property owners living near flood control facilities to buy flood insurance. The mandate was designed to shore up an insurance program that is billions of dollars in debt, largely because of Hurricane Katrina and other 2005 hurricanes.

Separately, the House approved an amendment to an annual spending bill that would prevent federal transportation funds from being spent in the next fiscal year for California's controversial high-speed rail project.

The amendment was sponsored by Rep. Jeff Denham, R-Calif., who cited the project's ballooning costs. Three California Democrats - Jim Costa of Fresno, Zoe Lofgren of San Jose an Laura Richardson of Long Beach - issued a statement calling the amendment an "example of how thoughtless partisanship would hurt all of California."