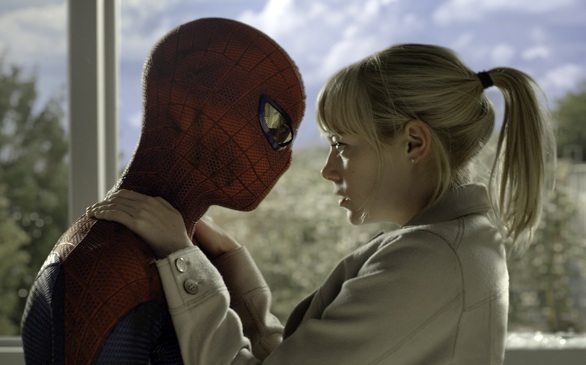 Andrew Garfield as Spider-Man and Emma Stone star in The Amazing Spider-Man.
(Credit: Courtesy of CTMG./ImageMagick)

Five years after Spider-Man 3’s theatrical release, Spider-Man is finally swinging back into theaters. However, this movie is not a sequel. For whatever reason (though most likely due to the rushed mess that was Spider-Man 3), it was decided that a reboot of the popular Spider-Man film series was in order. It was clear from early trailers and promos that this was a much darker Spider-Man than the previous three films –it seems that the studio wanted to go the Batman Begins route. But how does the film match up to the original trilogy in terms of quality?

For fans of the comic books, you may find that this Spider-Man film is much closer to what you’ve read; therefore, you may also find that you are more inclined to like this film than the campy Sam Raimi-directed movies.

Stepping into the shoes of a teenage Peter Parker is Andrew Garfield, with Emma Stone taking the part of Gwen Stacy, Spidey’s love interest. In The Amazing Spider-Man, Peter’s parents leave him with his aunt and uncle one night after someone breaks into their house. It seems the intruder was looking for secret documents that Peter’s father was working on for Oscorp with his partner, Dr. Connors. Peter discovers these documents years later, and he decides that he must sneak into Oscorp for answers. Luckily, Peter’s classmate Gwen Stacy works as head intern at the company, so rather than turning him in for impersonating an intern, she introduces him to Dr. Connors. There, he wanders into a room full of radioactive spiders. One of them bites him, and well, you know the rest.

Much like in the original Spider-Man film, Peter has some typical teenage problems with his Aunt May and Uncle Ben. However, Garfield takes teenage angst to the next level –but perhaps he takes it too far because it’s borderline annoying, and makes his character much less relatable. Also, it seems that Peter has inexplicably taken up skateboarding (which was Garfield’s idea). After the film has firmly established how annoying Peter is, Uncle Ben is killed. Everyone knows that this is coming, but The Amazing Spider-Man must be commended on how realistic and well done this scene was.

After the untimely death of his uncle, Peter hunts down his killer and helps Dr. Connors create a drug that turns him into The Lizard. Meanwhile, Peter reveals to Gwen that he is Spider-Man the first time they have dinner together (WHAT!?), and they begin dating. The only problem is that Gwen’s father, the chief of police, has issued a warrant for Spider-Man’s arrest –on what grounds, we can’t be sure.

Dr. Connors, convinced that his lizard form is the future of the human race, decides to turn the drug into a gas and release it in Manhattan. Basically, he wants everyone to be a talking lizard.

Despite upgraded graphics and 3D technology, The Amazing Spider-Man doesn’t offer anything that the original three movies didn’t. In fact, it even takes away some of the good elements. Why does Peter have to use web cartridges? It was better when it was all organic. Also, it seems that the writers just could not find time to develop any of the characters or their relationships well. Everything feels extremely rushed, and at most points there is too much going on. At the same time, it feels like something is missing. Garfield is not a good fit for Peter Parker by any means, and his often-awkward acting was difficult to watch (particularly in the Uncle Ben death scene). Stone is a wonderful Gwen Stacy, but even her character seemed underdeveloped. Also, it will be clear to anyone who has seen Titanic that both films were scored by the same composer. At several points in the film, the music is almost identical to the Titanic score.

The Amazing Spider-Man is a good movie, but there are so many problems that could have easily been fixed. Fans of the original film trilogy will most likely want to go home and watch those after seeing this film. In fact, perhaps the best thing to do would have been to just make a Spider-Man 4. Was anyone asking for a reboot anyway? That said, the film is still a must-see for hardcore Spider-Man fans, and there are sure to be several sequels on the way.