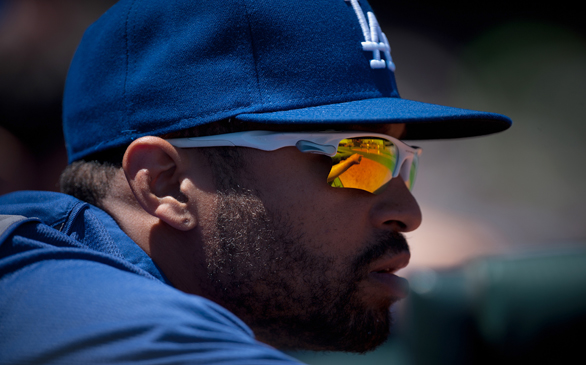 Dodger fans really don’t ask for much. They’ll happily sit in congested traffic and fork over 10 bucks for parking, and another 30 or 40 bucks for a decent seat, all for a chance to watch their team live. They’ll stand in line for the (in)famous Dodger dogs and pretend they taste good, and spend 11 bucks on a beer. They’ll file into smelly bathrooms and patiently wait for the luxury of pissing in a horse’s trough.

They are, by and large, a fun-loving and amiable group, taking joy in the simple pleasures of life at the ballpark: a soulful rendition of our national anthem, a geezer couple smooching on the Kiss Cam, a fat woman dancing on the big screen to Bon Jovi’s “Living on a Prayer.” All they really want is something to root for on the field every once in awhile. It doesn’t take much: a nice play here and there, a stolen base, a strike out –that’ll get their gooses bubbled. But should a Dodger base runner actually circle the bases and score a run, that would be something! For that would be a first and necessary step to actually winning a ballgame, something the team has not done in over a week.

To give some perspective, the Dodger lineup has gone scoreless in 56 of their last 57 innings through Saturday night. In their last 12 games, they have scored a paltry 15 runs, winning only one of those games. In that time they have watched their lead in the NL West vanish. In terms of offensive production, it has been the worst stretch in L.A. Dodger history.

“My job has to be about seeing the light at the end of the tunnel,” says manager Don Mattingly. “This is gonna pass.”

But with each compounding loss, the passing gets slower and harder to take. The good cheer that marked the club through most of the season, and that carried on even during losing streaks, has finally started to taper off.

After the fifth inning on Saturday, when a homerun by Mets first baseman Ike Davis put the Mets up 5-0, one felt a certain sunken feeling of resignation from the club. As the scoreless innings persisted, your heart could only go out to the team, and you couldn’t help but feel, “Get the poor guys off the field.”

In the clubhouse after the game, when the Dodgers had officially been shut out for their fifth time in six games, Mattingly echoed the sentiment: “I think everybody is like, ‘Hey, can we take the weekend off, take a couple of days off and maybe just not show up tonight?’ –but that’s not a choice for us. We’re going to have to come back and be ready to play.”