Katy Perry: Part of Me 3D 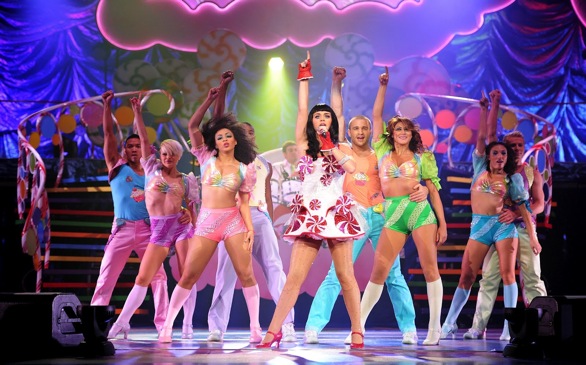 Katy Perry gives us an inside look at her "California Dreams" tour.
(Credit: Paramount Pictures)

Whether you’re a Katy Perry fan or not, this 3D documentary will have you purring like a Katy Perry kitty, as Perry likes to call her fans on her Twitter. The two-hour documentary gives a behind-the-scenes look into Perry’s 2011 “California Dreams” world tour, during which she sings her heart out for 12 months straight.

The film is directed by reality production company Magical Elves, who are the brains behind hit reality shows like “Top Chef” and “Project Runway.” They truly add a magical touch, emphasizing the glitz, glamour and cartoon-like atmosphere of Perry’s tour.

Confetti, swirling peppermint candy bras and a never-ending whipped cream gun come at you, ensuring you’re “wide awake” throughout the entire movie. You truly get an insider’s look into Perry’s concert life, with behind-the-scene clips that include Perry trying on her often delicious-looking costumes (my personal favorite was her chocolate cupcake dress).

However, we also learn that behind the colorful costumes and wigs lies Katheryn Elizabeth Hudson (Katy Perry’s real name). Most people think Perry was an overnight success, but this movie proves them wrong. It shows the long journey she went through to make it to where she is today. You even get to meet the Perry family, and one of my favorite moments of the movie is when the singer pays a visit to her grandmother, who is just as silly as the star herself.

While most documentaries portray Hollywood stars in the brightest of light, you actually get to see the human-side of Perry here. There are multiple scenes that show her exhausted and without make-up. She even insisted on including the emotional divorce with ex-husband and comedian Russell Brand. The film shows Perry working hard at the marriage, and continuously flying back to L.A. to see Brand, even when she only had three days to rest. And although I’m sure it’s somewhat biased – since Perry co-produced this movie – it shows Brand doing nothing to make the marriage work. One of the most memorable scenes shows a depressed Perry, sobbing and lying on a chair moments before a show is supposed to begin. Her manager asks if she wants to cancel the show, but Perry sucks it up and gets ready, forcing on a smile seconds before appearing on stage.

I was not a huge Katy Perry fan to begin with. Sure, I sang along to all her big hits like “Last Friday Night” and “California Gurls” when they came on the radio, but I had never expected to become a Katy Perry kitty until I saw this documentary. A lot of the movie is geared towards a younger audience (it’s even rated PG) and the message is that anything is possible. With inspirational clips from teens and kids in the opening and ending of the movie, Katy Perry: Part of Me 3D shows the audience that Perry is human, and that if she can make her dreams come true, so can we. Rarely do I enjoy such glitzy, 3D concert-type films, but this documentary took me by surprise. Hopefully you’ll become a fellow kitty by the end –and the Perry-inspired, heart-shaped 3D glasses you get at the beginning are a great start.