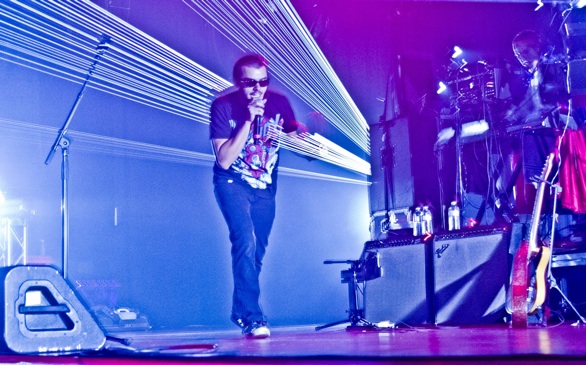 It takes a special kind of band to ruin an epileptic’s night in a couple of beats, but if there’s one that can consistently do it without fail these days, it’s none other than Ghostland Observatory.

With clouds of smoke, pulsing strobe lights and an army of lasers penetrating your retinas from start to finish, Ghostland’s live performances are sensory overload at their finest. The real question, however, remains whether those extracurricular activities on stage will continue to electrify crowds like they have over the past three years. Let’s just put it this way: Your first Ghostland show will be a lot more exciting than your fifth.

Not that the duo’s recent stop in Los Angeles was a total waste of time for those who stuck around Downtown after the X Games concluded, it’s just that Ghostland’s 90-minute set lacked the raw energy and emotion its previous two appearances at Club Nokia exuded. And although a Sunday night date didn’t exactly help matters, it was pretty clear that the spark was never there.

Outside of singer/guitarist Aaron Behrens’s maniacal dance moves and a light show that could turn you cross-eyed before too long, Ghostland covered much of the same ground as we had heard before.

With a new album expected out later this year, there was hope that the Austin, Texas-based outfit would fill our eardrums with some new chops. That call was partially answered during the evening’s second encore, as Behrens crooned over another synthesized disco beat from Thomas Ross Turner on “Only You.”

But for the most part, we were left revisiting hits like “Glitter” and “Give Me the Beat” off Ghostland’s latest studio effort, Codename: Rondo, which has struggled to garner the same recognition Paparazzi Lightning and Robotique Majestique have received.

In that way, it’s surprising how long Ghostland has been able to keep its flame burning with only a frontman and a quasi-DJ (Turner plays drums, keyboard and synthesizer) steering the ship.

So on a night that featured few highlights and few memories, it was all too fitting that a half-empty room of people erupted when it came time to sing “Sad Sad City.”