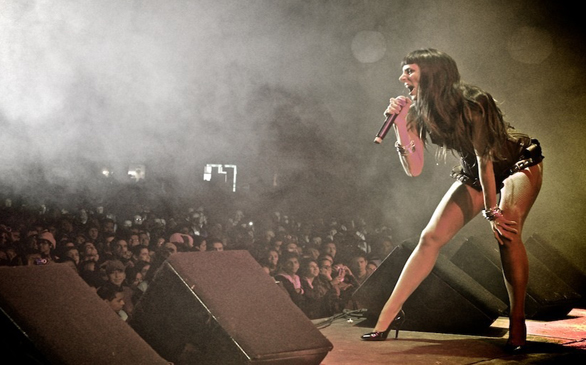 She is different, and that is what makes her special in the music industry.  Like many artists, she has critics, but she chooses to pay them no mind.

She considers kids playing soccer on the streets the "real soccer," not the games that professionals in her native nation of Spain play.

"I just don't watch that," she says of Spain's national team, who just won the Euro Cup. No surprise here, as she would rather concentrate on more important aspects of the world.

This is La Mala, a 33-year-old acclaimed rapper from Cádiz, born María Rodríguez. La Mala, a Latin Grammy winner, is beautiful physically, and sexy in her own way. But its her lyrics that reign supreme in her ongoing career, as well as her unique musical style: She fuses alternative, hip hop, Latin rap and Spain's very own flamenco in her tracks --and it all sounds just fabulous.

"By age 14, I noticed a passion for it," La Mala says of her singing, rapping and songwriting. "I have always liked to write since I was young; hip hop has been the tool that has helped me develop and express my concerns."

La Mala focuses on producing music based on topics like racism, domestic violence, poverty and female empowerment. In fact, she represents women quite well, defending their thoughts, opinions, feelings and actions. But the difference between La Mala and other female rappers lies with her unbridled passion and desire to be original.

"The biggest thing that has influenced me in my career is the music I heard as a kid," she explains. "I saw the jazz scene through my uncle, who I lived with, as well as flamenco. Thanks to those genres, to the Latin music and my Colombian relatives, I gained an open mind."

Much of La Mala's music has been featured in popular movies, including the Mexican film Y tu Mamá También. Her seven studio albums and one E.P. depict the wide range she has developed since beginning her musical career in 1998. But for La Mala, her career has been about much more than achieving success.

"[In these 13 years], for me, the biggest benefit I have had in my career has been getting to know myself," La Mala confesses. "I am well in my skin. I feel comfort with my life. I am my best friend."

The talented singer and rapper has enjoyed successful collaborations with Puerto Rico's Calle 13 and Tego Calderón, Mexico's Julieta Venegas, Nelly Furtado and modern bachata king Romeo Santos, and is currently on tour in the U.S. She has experienced solid receptions on the East Coast, including stops in Washington D.C. and Miami --the West is next, with shows in Los Angeles and San Diego, among others.

"This tour is something beautiful for me because I am getting to know the public that will come to the shows," La Mala says. "It is nice to come out here and know them."

L.A. is lucky to be hosting such a unique talent.

"There will be a lot of fire," La Mala says, hinting that her upcoming performance will be full of energy, excitement and much to talk about musically.