Oedipus' Latest Release is a Raucous Celebration of Successes to Come 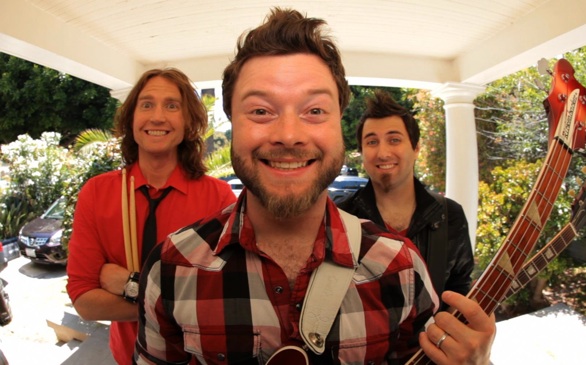 The Los Angeles rock band is ready to conquer the States.
(Credit: facebook.com/Oedipus)

Bassist/lead singer Jeremy Haffner and guitarist Stephen Cohen formed the band as teens, after meeting each other through their local youth hockey team at the age of 6.

“Touring with Oedipus is just an extension of what we grew up doing: traveling all over the world to compete in hockey tournaments,” Cohen told Fearless Radio in an interview. “In 1997, we were the first California youth team to ever win a National Championship, so we know firsthand that hard work can pay off.”

Officially a band in 2001, drummer Keith Larson joined in 2004, completing the trio. Since then, the band has worked hard to get their music out there. They recorded three self-released full-length albums — 2005’s Humbility, 2008’s Covetous and 2010’s self-titled European release — as well as two E.P.s, and they have self-booked and promoted their own tours throughout the U.S.

Finally, 2011 was the year it all came together. The trio, self-described as “boisterous, exuberant and uncontrollable,” signed a worldwide recording deal with THC Music/Rocket Science/Sony RED, which released Vicious Little Smile this spring.

The album is a toast to their previous successes, as it includes their hits that have already become international favorites like “Tres Las,” “Burn it Down,” “Gimme a Chance” and “Kiss on the Fist.”

Haffner said that the band knew they had something special in leadoff single “Tres Las” when they played it at an underground show to a bouncing L.A. crowd, a notoriously difficult city to satisfy. With a solid backbeat and positive feel, the track proved to please everywhere, and it soon found itself amongst the likes of Snoop Dogg and Katy Perry in a Polish edition of Now: That’s What I Call Music!

That’s not to say that the band has rested with its proven hits. The album’s new tracks are a hopeful (and raucous) celebration of all their success to come. Their collaboration with Def Leppard/Manraze guitarist Phil Collen, who counts himself as one of their many fans, is stirring up quite the commotion. The up-tempto track, “Final Machine,” is a highlight among the 12 songs on the high-energy Vicious Little Smile.

Oft compared to 311 and Muse, the band is already a hit in Europe, recently performing a string of shows to over 100,000 people. Equipped with Vicious Little Smile, they’re ready to take the U.S. by storm too.

Vicious Little Smile is available now. Catch Oedipus on tour at the Newport Dunes Waterfront Resort on July 6, or at the House of Blues in Anaheim on July 21. For more information on the band, visit oedipusband.com.