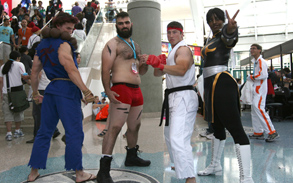 Fans dress up as their favorite characters.
(Credit: A.J. Grier)

The area around the Los Angeles Convention Center went from one extreme to the other over the weekend of June 29: On one side was the X-Games, with its extreme motorsports, and on the other side was Anime Expo 2012, with its extremely devoted fans wearing some pretty extreme costumes.

While they may be on very different ends of the pop culture spectrum, they were geographically on top of each other. The X-Games RallyCross track was only feet away from the doors of the convention center, which made for a deafening crossing of the street to enter the Expo. Once inside however, the only noise above the the subtle hum of the crowd was the was the occasional screams from girls as they recognized a cosplayer dressed as their favorite character. That, coupled with the pleasant air conditioning, made for quite the oasis from the extremity (heat, noise and energy drink hocking) just beyond the doors.

With so much scheduled for the 21st Annual Anime Expo, I was as giddy school girl to attend. (No, I did not wear the uniform; however, it was more then represented throughout the complex.)

Unfortunately for everyone, famed cosplayer and spokesperson for the video game "Lillipop Chainsaw," Jessica Nigri couldn't attend as scheduled due to a family emergency, but all was not lost as there were plenty of things to attend and see over the weekend. Most of my close friends don’t really share my enthusiasm for pop culture, so I always forget how great it is to sit in a huge ballroom filled with people who get excited about announcements of upcoming releases from our favorite production companies, or listening to the anecdotes of a panel of our favorite voice actors.

The second panel was just one guy by the name of Steve Blum, who is one of the most prolific voice actors in the industry. His panel began with a reel of some of his more famous characters; each scene was about 10 seconds, but it went on for about 10 minutes! His IMDB page lists 460 credits as an actor, and they include Spike Spiegal from "Cowboy Bebop," Amon from "Legend of Korra," Grunt from "Mass Effect 3" and damn near every animated version of "Wolverine" there has been, just to name a few. Needless to say, he was very popular. He pretty much did Q&A for the full hour, answering questions and taking requests to say things in one of his many characters’ voices. Everyone had a lot of fun.

There really is too much to write in this small review, but you can check out a few of my photos in the slideshow and see even more on my flickr page.