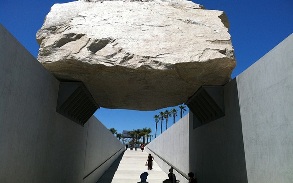 “Is that it?,” an older man asks his female companion upon sight of the 340-ton boulder.

Four days prior, on June 24, Los Angeles County Museum of Art director Michael Govan delivered a much wordier speech in front of an excited crowd. After a widely watched 11-day excursion from Riverside County, the artwork titled “Levitated Mass” has finally reached its home for the next 3,500 years.

Govan says, “I and many others have compared this sculpture to the megaliths of the earliest Neolithic peoples, to the granite monuments of Ancient Egypt. Those great objects recall the beginning of art and human civilization… For me, it’s better than those ancient monuments because it is not an expression of the power of gods and kings, but rather of people –of the museum visitor that descends into an empty abstract space defined by linear concrete walls to see the monolith from below, virtually levitating in our beautiful California sky.”

Artist Michael Heizer, who specializes in large-scale sculptures and land art, conceived of the “Levitated Mass” in 1969. He envisioned a 456-foot-long slot over which a granite megalith will perch. Ten million dollars in private donations later, his plan is realized, but not without debate. The casual observer may easily see the work as a giant (and expensive) rock on top of two rails, and may even point out that the word “levitated” is the wrong adjective for it. But others do take to heart the theme of largeness that one feels looking up at the monumental boulder from below.

As Govan adds, “I can read it as a series of visual and visceral oppositions: weight and lightness, mass and emptiness, up and down, solid and line, organic and human-made, nature and culture. You will read it your own way.”

“Levitated Mass” is an ongoing exhibition located on LACMA’s Resnick North Lawn. No admission ticket is required to view it. LACMA is located at 5905 Wilshire Blvd., Los Angeles. For more information, visit lacma.org.

Art
Homeless artist wants to ‘be the light’ on LA’s skid row
1,425 views

Art
Muralist Robert Vargas is painting a towering history of LA above the traffic
5,329 views