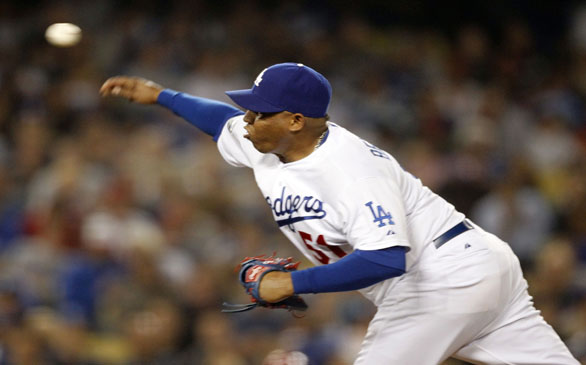 Although left-handed starting pitcher Chris Capuano did not receive the win, he should be credited for it nonetheless. Over six innings, Capuano was solid: He posted six strikeouts while surrendering three walks and an earned run on six hits.

Arguably an All-Star snub, Capuano's ERA now registers at 2.62. This is good enough, well, great enough to collect admirable attention from the league. But despite him not being named to the game this year, Capuano still managed to stay composed and deliver a much-needed solid pitching feat for L.A.

However, Capuano was not the only pitcher to show brilliance against the Reds, who are one of the top NL Central teams. Josh Lindblom, Scott Elbert, Ronald Belisario and Kenley Jensen pitched three scoreless innings combined while giving one hit and a walk. Jensen got his 13th save.

''You can't help thinking about it,'' Capuano tells reporters after the game regarding not making the All-Star team. ''But at the same time, I got into some tough situations where I really had to try to not think about anything else or else it could have snowballed out of control. I was aware that they had [Johnny] Cueto on the other side, and he was pretty effortlessly cruising through that game. So I knew that one pitch was going to be the difference.''

For the Reds, their ace Johnny Cueto threw well, but not good enough. Cueto lasted seven innings, relinquishing three rungs on seven hits and fanning seven batters. His trouble arrived in the seventh inning when Luis Cruz stepped to the plate.

With the score knotted at 1, Cruz hit a double that plated the go-ahead run in his second game with the Dodgers. On the rally throw, Cruz advanced to third before stealing home on the next pitch.