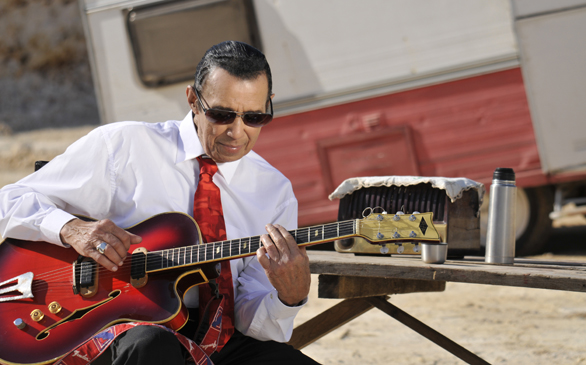 Manuel Galbán played an imperative role in the success and growth of Cuba's internationally known musical orchestra Buena Vista Social Club. Galbán became a Grammy winning guitarist, pianist and arranger, with recognizable work with Los Zafiros and Ry Cooder as well. He died on July 7, 2011 at his home in Havana, Cuba. But he did not leave silently, for his musical career cultivated much to talk about.

The CD/DVD feature was co-produced by Juan Antonio Leyva and Magda Rosa Galbán, the daughter of Manuel. Campus Circle had the unique and incredible opportunity of speaking with Magda Rosa, who resides in Cuba.

Campus Circle: Tell us about the musical relationship you had with your father Manuel Galbán.

Magda Rosa Galbán: Ever since youth, we have had a close relationship. Thanks to him, I grew up breathing music. Quite often, we played the piano with four hands, and his influence made me dedicate myself to musical studies completely. I owe him everything.

CC: In terms of music, what do you recall the most from your father?

MRG: My father did not imagine life without music. Once I told him that I would always remember him by the sound of his guitar when he no longer would be with us. I live proudly knowing that his journey in this world left a mark. I thank the existence of his many materials from his extensive professional life; it is his legacy towards Cuban culture and it allows me to continuously remember him.

CC: What is your favorite track off the album? Why?

MRG: It is difficult to select one tune, but I can say the one that my father liked a lot was "Alma Mía" (My Soul). The established dialogue between the warm voice of Rosa Passos and his guitar is just like a whisper.

CC: Describe life in Cuba and the musical scene there.

MRG: Cubans are very musical; music forms a part of every moment of our lives. The formation of art schools is very solid. From a general perspective, it makes the level of Cuban musicians high. The Cuban musical scene contains all the genres from traditional music (jazz, rock, etc.); that makes it vary.

CC: Is there anything else you would like to add about yourself, the CD/DVD or your father?

MRG: It is an immense joy that this disc allowed us to work like family. We always had a close relationship, but we never worked together - especially in such a close manner as this one, to say the least. I hope the public sees the love and honesty in which this was done.

For more information about Manuel Galbán and his late work, click here.