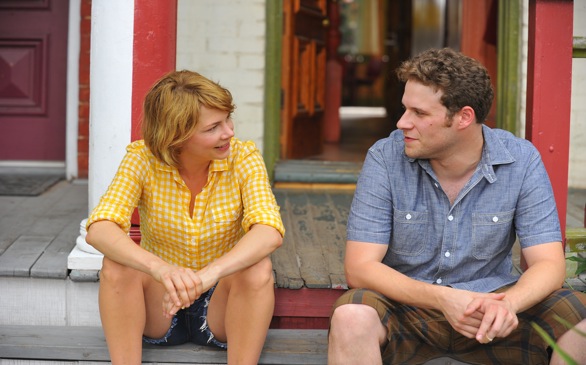 We all know that fleeting moment of falling in love, a feeling so transient that we often find ourselves trying to remember its sensation, but with no such luck. In writer/director Sarah Polley’s second feature film, Take This Waltz, the emotional reality of relationships is unveiled as a restlessness that ensues between married couples that have well moved on from the honeymoon stage.

For Margot (Michelle Williams), a sort of emotional drifter and writer that doesn’t write much, and Lou (Seth Rogen), a cookbook writer, now married five years, their relationship isn’t necessarily unhappy, but a sense of claustrophobia and sadness lingers just underneath their surface that blows wide open with the arrival of Daniel (Luke Kirby), an artist who moves in across the street.

The magnetism between Margot and Daniel is zealous, heightened with the rush of restraint they both keep despite the eroticism induced by a simmering Toronto summer. The film’s ambiguity leads to various interpretations of Margot’s decision regarding infidelity –the truth is nobody will ever really know.

Take This Waltz is ultimately a coming of age film about a woman who begins to see the reality of romance, and it’s no fairy tale with a happily ever after. Polley expertly crafts each character to portray this more realistic version of romance: Margot as the dissatisfied wife, who wonders if she’s missing out on life as it passes her by; Lou as the passive husband, who avoids conversations and is never fully aware of what is happening around him; and Daniel as the object of desire, who makes you question your life.

With Polley’s natural and deep understanding of subtext and people’s needs, wants and desires, Take This Waltz makes us question our own levels of happiness in our relationships. Are our needs being met? Do you still laugh? Do you still enjoy being alone with them? Can you still overlook minor annoyances?

Take This Waltz ultimately makes a bittersweet, yet realistic statement: that no matter how passionate a new relationship can be, it’s only a matter of time before it reaches the same plateau as any other relationship.

Take This Waltz is now playing.