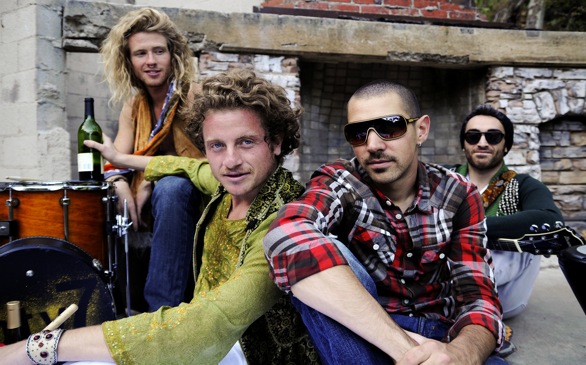 Local band Twenty7 will have their music featured in a James Franco movie.
(Credit: bandtwenty7.com)

THE SPARKLE SINGING CHALLENGE
Sony Pictures and MySpace are sponsoring the SPARKLE Singing Challenge, a talent contest taking place nationwide and in Los Angeles on July 14 in conjunction with the August release of the movie Sparkle, starring Jordin Sparks and the late Whitney Houston. Amateur singers between the ages of 13 and 40 will be asked to sing a 60-second a cappella version of one of two songs from the film, either “Celebrate” or “Something He Can Feel.” Clips from the songs, official rules and information about how to pre-register for the contest can be found at myspace.com/sparkle. Local participants will compete at the studios of KPWR-FM in Hollywood, and the local winner will get $500 and a chance to compete for the Grand Prize: a trip for two to New York, an appearance on BET’s 106 & Park, a recording session with the Punch Monkeys and a MySpace homepage feature.

FREE SCION LABEL SHOWCASE
Pay-as-you-want provocateur Moshpit Tragedy has teamed up with Scion Audio/Visual for a special free label showcase at The Glass House in Pomona. The show takes place on July 21, and will feature live performances from Phobia, Morne, Total F*cking Destruction, Skarp and Seas Will Rise. The bands will play back-to-back abbreviated sets, and the event will be recorded to be released as a free album featuring two tracks from each band. The show is an all ages matinee. RSVP for your free tickets at scionav.com/metalshow.

TWENTY7 PICKS A CHERRY
Congratulations are in order once again for Los Angeles-based world music/rock band Twenty7. Late last year, the band was named one of the top unsigned bands by respected national trade publication Music Connection, and early this year the band’s “No Chemical Love” from their Papatya E.P. was nominated for Best Indie Rock Song at the Artists in Music Awards. Now Twenty7 is breaking into the movies as their latest single “Second Mind” is featuring in the recently-debuted film Cherry, about a teenager who gets tangled in the pornography business. Cherry stars James Franco and Heather Graham and is slated for major exposure thanks to a distribution deal with IFC. Twenty7’s next move is a single titled “Valley of Fire,” currently being recorded with an unnamed but GRAMMY-winning producer. bandtwenty7.com

ATTIKA 7 HELMET DESIGN CONTEST
The new ATTIKA 7 album Blood of My Enemies is scheduled to drop on July 31, and the band has teamed with Hot Bike Magazine to sponsor a helmet design contest. Entrants will need to create a unique ATTIKA 7-themed biker helmet, then take a picture of it and post it on Facebook. The photo with the most “Likes” will win two free tickets to the ATTIKA 7 show of the winner’s choice (transportation not included), a signed cloth banner, a signed poster or lithograph, and baseball caps from Hot Bike Magazine. Contest ends on July 31; find more information on the ATTIKA 7 Facebook page.

50 YEARS OF REGGAE MUSIC
August 6 marks the 50th anniversary of Jamaica’s independence, and reggae music label VP Records is releasing a 3-disc box set to commemorate the occasion. Out of Many: 50 Years of Reggae Music features, you guessed it, 50 songs, with each year of freedom being represented by one song. The set appropriately kicks off with Lord Creator’s 1962 hit “Independent Jamaica,” and wraps up with this year’s version of the same song performed by Peetah Morgan & Hollie Cook, with cuts by the likes of Gyptian, Yellowman, Dennis Brown, Augustus Pablo, the Skatalites, Beenie Man, Etana, Gregory Isaacs, Eek-A-Mouse and dozens more in between. Find the complete set listing at facebook.com/50yearsofjamaicanmusic.