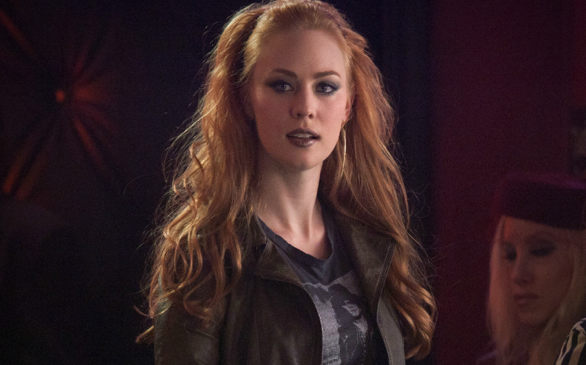 Tara gets into a fight, Terry’s fire problem is explained, Sam’s life continues to suck, Sookie and her boys team up and our favorite psychotic vampire is back!

Unfortunately for Sookie (and us), sexy time with Alcide is cut short when she drunkenly vomits over his shoes –and then her two exes show up at her bedroom door. Awkward! After some fighting/barking between the three men and a sassy outburst from Sookie (“A 3,000-year-old vampire wants to suck my blood? Must be Thursday!”), the five of them set out to find the former King of Louisiana. After peeking into the memories of the employee who was glamoured to unearth Russell, it is revealed that a woman from the Authority was responsible. Was it Nora...or Salome? We’ll save that for next episode. Continuing on, the rest of the episode seems like a very creepy horror movie set in a run-down asylum complete with corpses, rats and Russell’s straitjacket-clad dinner. Finally they reach Russell, who appears to be bed-ridden, but he may not be as weak as he looks. Just as Eric is about to attack, something drags Alcide out of the room distracting everyone from Russell.

Even though she’s still not getting any love from her maker, Tara goes from suicidal and broody to sassy and sexy. As the new bartender at Fangtasia, she converses with Jessica, who orders a drink and the two have some girl-talk. Once again, Jessica proves to be the best friend we wish we had. This time she’s comforting Tara, and they bond over their newbie vamp woes. However, the new friendship is short-lived when Hoyt, dressed like he’s in an ‘80s pop band, tries to pick up Tara. At first Tara isn’t interested, but by the end of the episode she’s drinking him in a bathroom stall. In the stall next to her Jessica hears her ex and a vamp-style catfight ensues.

Terry’s storyline just gets weirder and weirder. We’ve seen maenads and witches, but now we’re confronted by a fire monster known as the Ifrit. Patrick and Terry are tied up by their former squadmate Brian, who is talking about seeing a fire that is alive and hunting them. At first it seems like he’s just gone crazy from PTSD, but Terry starts to remember seeing the fire too. In another flashback to the night in Iraq, one woman survived the shooting only to be killed by Terry on Patrick’s orders. But before she died she put a curse on the squadron, stating that a fire would burn them and everyone they loved. While burning the bodies of the dead civilians, Terry saw the Ifrit. Back in the present Terry realizes that the Ifrit is coming for them. He and Patrick are able to escape, but Brian is left in the basement. An eerie black smoke appears (reminiscent of the smoke monster in “Lost”) and burns Brian alive.

On another note, Lafayette is having troubles of his own. He is still being haunted by the brujo head, and sees his religious figurines start mocking him (maybe he’s just tripping on acid?). He calls to Jesus to help him, which prompts a disturbing vision of his boyfriend’s head on his coffee table with his mouth sewn shut. The same vision shows up to Lafayette’s mom in the nursing home, but she seems unfazed that a decapitated man is on her bedside.

Poor Sam just can’t get a break. After finding his shifter friends dead, he calls the police. Andy and Jason come to the scene, and after trying to piece together what happened on their boys-night-out-gone-fairy, they decide to never go back and never speak of it. Focusing on the case, Andy finds the bullets that killed the shifters were wooden. He suggests that this might mean a supernatural-hating group is behind the murders. A concerned Sam goes to Luna’s place to warn her. As he’s leaving, he and Luna get shot by a truckload of Obama-masked hillbillies. Emma is able to escape after shifting into a wolf pup, but it seems that she might be an orphan now...which may lead her to join the pack.

Russell threatens Sookie
Things might not be over between Hoyt and Jessica
The Sup serial killers visit Fangtasia
Terry makes it back to Bon Temps, but the fire may have followed
More drama at the Authority - is Lillith coming?