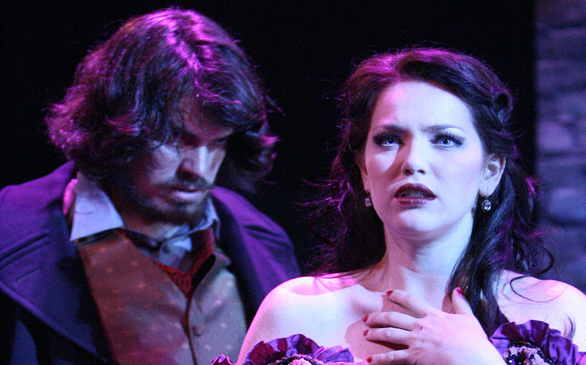 In "Jekyll & Hyde, the Musical," which is now playing at the MET Theatre, we come to appreciate a resplendent display of acting and singing from two different characters played by one man: Chris Kerrigan.

Kerrigan, who has been in a handful of theatrical productions over the past decade, gives a solid performance as both Dr. Henry Jekyll and Edward Hyde. His singing abilities are worthy of musical stardom, and his energy and passion for the theatre emanates through his acting.

The show also features above par performances from Amber Gildersleeve as Emma Carew (Jekyll's fiance), and Nik Roybal as Gabriel John Utterson. However, it is Cassandra Nuss, who plays a lustful, voluptuously beautiful prostitute, who really steals the show in this production of the Tony-nominated Broadway sensation.

Nuss, holding a BFA in Theatre Performance & Dance from Wichita State University, shines in her portrayal of Lucy, who is in love with Hyde. Lucy is a firecracker in the London setting, but she also has a sense of purity and an innocent touch that makes the audience ultimately fall in love with her.

With the direction of Marco Gomez, music by Franj Wildhorn and lyrics of Leslie Bricusses, "Jekyll & Hyde, the Musical" is sure to have a successful run this summer, for its delightful, sexy, gothic production.