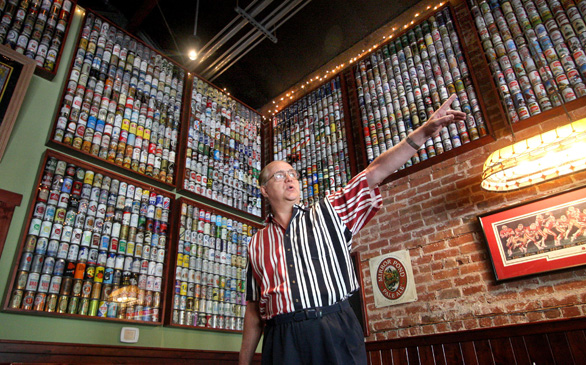 David Goett of Livermore, California, has over 6000 different beer cans from all over the world.
(Credit: Jim Stevens/Contra Costa Times/MCT)

It's a beer can collection that would make even the nation's top party school envious. And it was amassed without the hangover.

For the last 36 years, David Goett has been assembling one of the largest collections of beer cans in North America. Tuesday, he shared it with the world.

The Livermore man's collection of more than 6,000 cans is now on permanent exhibit on the walls of the First Street Alehouse in Livermore, making it the largest collection on display on this continent.

"This is the collection's 15 minutes of fame," said Goett, who began acquiring cans as a junior at the University of Connecticut in 1976.

Case after case of cans ranging from steel flat tops to cone tops to pull tabs grace the walls of two rooms at the alehouse. The collection has cans from 96 countries that Goett acquired by either visiting the country or trading with fellow can aficionados.

"It is a unique collection," said Goett, whose cans had been in storage for the past two decades. "I wanted to find a venue to show them and for everyone to appreciate them."

Goett, 56, is a born collector. He has been amassing items since he was 8, starting with baseball cards -he now owns every Topps card made since 1951.

While Goett may boast the biggest can collection ever publicly displayed, it is not the largest in the country. That honor belongs to a Philadelphia man, Jeff Lebo, whose collection numbers between 50,000 and 60,000, said Bill Boyles, president of the Brewery Collectibles Club of America.

The BCCA, as it is known to its more than 3,500 members worldwide, holds an annual CANvention and pays homage to everything breweriana, especially cans. The group, of which Goett is a member, started in 1970 with five members in St. Louis, Mo., who originally called themselves the Beer Can Collectors of America and traded vintage cans.

"I love cans, and some of the advertising pieces on the cans are beautiful and are works of arts," said Boyles, who has a collection of more than 3,000 cans in the basement of his Kearney, Mo., home. "It is an interesting hobby."

It can be a lucrative hobby as well. One particular can - a 1930s Grace Brothers Brewery can - has been selling over the last few years for $19,000, Boyles said.

Goett said there isn't a can in his collection worth that amount, but his most expensive can is probably worth a few hundred dollars.

His collection features steel and aluminum cans, including one of the first cans produced in 1935 by Krueger's and a rare Duquesne Brewing Co. cone-top, olive drab, camouflage can that was produced for U.S. personnel fighting abroad during World War II.

And while Goett did not partake in drinking the contents of every can he owns, he did say he put a dent in them.

Most collectible cans are stored empty, to prevent rust from developing in the older models.

"Drinking the beer is part of the fun in collecting the cans," Goett said.

For more information about the Brewery Collectibles Club of America, go to www.bcca.com.