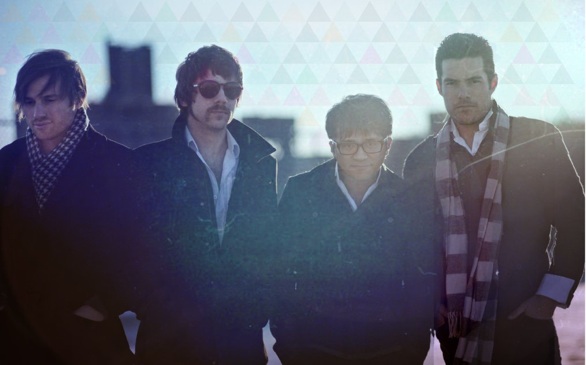 L.A.-based Saint Motel is much more than a rock band.
(Credit: Nick Weissman)

In between noodles, beers and jokes, the Los Angeles-based rock band explains why Voyeur seemed like the ideal title.

“Voyeur has to do with the fact that the album feels like its taking place within a place, and the songs are stories that happen there,” explains Jackson.

Their debut album, Voyeur (due out July 10 via On the Records), continues where their ForPlay E.P. left off and ventures into a whole new sonic realm. The collection of songs is doused with tropical, Latin, big band and ‘60s sounds that showcase their musical versatility, and this time their poppy guitar riffs are replaced with new instruments such as piano and strings.

“We don’t know where we’re going yet; it’s still developing, which means the next best thing is always around the corner,” says Dak.

ForPlay is an incredibly cinematic E.P. In fact, each of the songs off that work comes accompanied by a very surreal video. The videos were produced and directed by the band, one of the group’s unintentional trademarks.

“We’re definitely not going to make a video for every song on this album,” says Jackson with conviction –before realizing that they’ve already made four videos for Voyeur. “So far we’ve made four videos, and we’ve talked about a fifth and a sixth, but there’s 11 songs so that’s barely half!”

Regardless of their musical direction, visual ingenuity is always front-and-center.

“Video is something we always find ourselves doing,” explains the rock outfit that met while in film school at Chapman University. “Its our creative outlet, and ultimately if it’s done right, it will enhance the song and take the enjoyment to another level.”

Although the debut took a completely different direction than their previous work, Voyeur definitely grasps the catchy pop melodies they are known for. This time however, the lyrics take a more mature tone, the sound has a more complex structure, and rock opera elements are introduced. Steering away from the rock-driven riffs they are accustomed to, the band opted to experiment with a more tropical approach: imagine pop fused with the film Casablanca and sprinkled with Electric Light Orchestra!

“The vibe of this album is more Latin, loungy, and has more strings,” explains Jackson. “This time around we experimented more with instrumentation, piano, and a lot of harmonies; the E.P. was kitschier and guitar driven.”

Every body of work carries a series of accomplishments and difficulties, and Voyeur is no exception.

During the making of the album the band faced some major challenges whilst dealing with a major record label that shall remain nameless. (I tried to pry it out of them, but they wouldn’t budge!) After many discussions, the band took a drastic turn and broke ties with the label. The group then opted to launch the new album under their own record label.

“At the end of that process we had an album’s worth of songs that weren’t very satisfying for us. So we decided to record the album ourselves; Voyeur is a mix of songs we recorded with that label and songs we recorded ourselves,” explains the quartet.

Working with a major label was a learning experience for the band. Always willing and able to forge their own way, the band decided to create their own record label, On the Records.

“We got signed by our own record label, it was a really big deal!,” the bandmates declare  with a sarcastic tone before they burst into laughter. “Yeah, we totally screwed ourselves.”

Never a dull moment with Saint Motel, the band continues to poke fun at itself.

“The deal was on the table for like eight years,” says Erwin while laughing hysterically. “We sold ourselves out to ourselves!”

Saint Motel isn’t your everyday rock band, as they are also known for throwing outrageously fun parties for people of all ages that display their cinematic skills and total dedication to their craft. This year they staged the sold-out Valentine’s Zombie Prom, which invited attendees to dress up like zombies and indulge in a different type of prom. The event included live performances and took place in an old hotel Downtown that’s said to be haunted. (No bath salts involved though.) If you’re lucky, you’ll see another one next year.

Like most great artists, the dynamic foursome are constantly creating and working in a variety of artistic fields, including photography, film, set design and more. So how do they unwind? The answer is easy: they don’t.

“We never unwind; we don’t have time for that,” they conclude.

Saint Motel’s tour kicks off home in L.A. with their headlining gig at the El Rey Theatre in Los Angeles, July 14 at 7:30 p.m. Tickets are available via ticketmaster.com.