Ecstasy: In and About Altered States 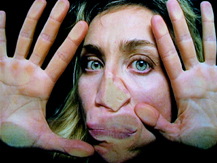 Untitled Document The pill poppin’ of the ’70s might be over, but doctors are still writing tons of prescriptions and underground black markets run by drug lords continue to serve happy customers in the streets. Even though the mind is a terrible thing to waste, Ecstasy: In and About Altered States at the Museum of Contemporary Art’s (MOCA) Geffen Contemporary exposes what happened when drugs mixed with the minds of 30 artists between 1990 and 2005. The pieces on display feature the works of artisan’s who transformed their trippy experiences into videos, photographs, paintings and sculptures, while others chose to build their own far out fantasy lands.

Examining the relationship between creativity and the altered state is Frances Alys’ Narcoturismo (1996), which focuses on the artist’s journey of walking through random neighborhoods under the influence of a different drug every day. The piece also includes a list of each drug taken by Alys during his intoxicated voyage. In the 26-minute video Halcion Sleep (1994), Rodney Graham documents his sleepy ride through the rainy streets of Vancouver after consuming the drug Halcion.

Artistically reincarnated built-environments include Carsten Holler’s Upside Down Mushroom Room (2000) and Jeppe Hein’s Invisible Moving Wall (2002), where a gallery wall slowly starts to close in on viewers at an imperceptible pace.

But this new-age art fest wouldn’t be complete without a few more technologically advanced works like Chiho Aoshima’s City Glow (2005) and The Muriel Lake Incident (1999) by Janet Cardiff and George Bures Miller. These artistic designers use audio and film to portray a drug induced futuristic city and miniature movie theater diorama, respectively.

Ecstasy: In and About Altered States at MOCA is an easy yet legit excuse to set your inhibitions free and experience what it feels like to get high – without inhaling.

Art
Homeless artist wants to ‘be the light’ on LA’s skid row
1,097 views

Art
Muralist Robert Vargas is painting a towering history of LA above the traffic
4,937 views

Art
French artist goes back to the source of the City of Angels — the L.A. River — for his new project
3,673 views