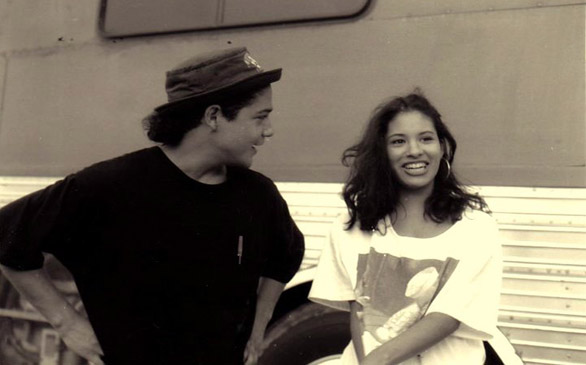 Chris Perez served as the lead guitarist for Selena and Los Dinos. But he's more known for also being the widower of Tejano singer Selena, who was murdered by Yolanda Saldivar over 17 years ago.

Nowadays, however, he's promoting a book, To Selena With Love, he wrote. Campus Circle managed to conduct an interview with Perez, who touched on the following subjects: the book To Selena With Love, the possibility of another book, Selena herself as a human being and singer, his music groupd (The Chris Perez Project) and his hobbies.

Campus Circle: Was there a particular inspiration for writing the book?

Chris Perez: Since the book has come out, I’ve been asking myself why I hadn’t done it sooner. It was a scary thought writing this book. There were certain occurrences in my life that made me feel it was the right time to try and do it. It was a slow start, slow process. I started it, but then stopped because I didn’t feel ready. But then, after talking to my manager, we decided to start over. The second time around, it took on a life of its own – almost as if I was being guided.  I was just reliving parts of my past, hoping it would begin the process of moving forward, and moving on with my life – to help me get things done personally and in my career. It was a heavy weight I had been carrying around, what happened with Selena when she passed away. But like I said, once I started the second time, it took on a life of its own, and it happened really fast. One of the hard parts was going back and reading some of the books that had been put out, seeing some of the misinformation and rumors that had been put out, but I made myself do it. I figured that if there were any misconceptions that needed to be clarified, I could do so in my book, from my perspective. I could write a whole other book about straightening out rumors and misinformation, but that’s not what I wanted the book to be about.

CC: Could there be a follow-up book?

CP: I’ve learned to never say never. But as of right now, I don’t think so. I think the book is serving the purpose I want it to serve, which is to portray Selena in a different light. I had nothing to fear and nothing to worry about in doing so because she was such a wonderful person. Everybody knows about her talent and her beauty, but they didn’t see this other side of her that I got to see. I wanted to share a bit of that with her fans, and I’m glad I was able to do so. The response has been great. Her fans are very thankful and appreciative. This book allows me to also show people how I really am as a person, through my own words.

CC: What made Selena so special as a musician and as a person?

CP: She was real. What you saw is what you got. She never acted a certain way just to impress anybody. She was just herself. And I think people can see that. They can see through the fake, the front – some people want to be perceived a certain way so they act accordingly. With Selena, you didn’t get any of that, and you could feel that right away. She could always make even the toughest person laugh. She could always make people feel like she’d known them forever. She was able to make people comfortable. As an artist, she made you feel what she was singing about. Nowadays, there’s a lot of people on the radio; they hit all their notes properly, sing the words correctly, but I don’t really feel what they’re singing like I felt it in her voice. That’s a rarity. When it’s real, you feel it.

CC: Tell us about your band, The Chris Perez Project.

CP: It’s a four-piece band. We do Spanish rock, which is something I’ve always loved. We write songs in English as well, but right now we’re going down the Latin rock avenue. We just got back from some studio sessions in Miami with George Noriega, who’s worked with Shakira and Ricky Martin. We recorded some new stuff, and any day now I’ll get the final mix for approval.

CC: What do you do with your spare time?

CP: Spending time with my kids. I love being a father – being there for my kids is the most important thing. I see them as much as I can – more than the divorce dictated. On paper you’re allowed certain visitation rights, but luckily their mom is cool with me and I see them more often. I’m all about my kids; that’s what makes me happiest, is being with them.

To Selena, With Love is now available. For more information on Chris Perez, click here.