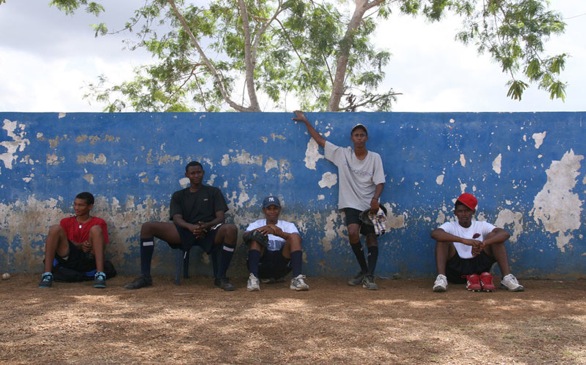 Pelotero gives an inside look at the lives of young Dominican baseball players.
(Credit: Strand Releasing)

Filmmakers Ross Finkel, Trevor Martin and Jon Paley embark on a fascinating journey and offer a peek behind the curtain to see what makes a great Dominican ballplayer. In their film, Ballplayer: Pelotero, a staggering statistic is revealed: 20 percent of ballplayers in the major leagues hail from the tiny country of the Dominican Republic. With so many talented players coming from this country, why are they still so underpaid? The film delves into the politics of the game, and the infamous signing day for new major league prospects on July 2 every year.

Pelotero follows two 16-year-old boys, Jean Carlos Batista and Miguel Angel Sano, both shortstops with dreams of making it big. Both July 2 and the age 16 are the magical numbers, where young men can get signed to a major league farm team and then hopefully to the big leagues. If they don’t sign within that year, their value significantly drops –talent doesn’t necessarily drop, but their value decreases in the eyes of the coaches and trainers.

Batista and Sano have very different personalities. Batista is a very serious young man who has worked hard for this day since the age of 10. Sano, who has also worked hard, is louder and more effusive of his talents with a braggadocios quality. Both have the same dream of buying a nice home for their families, and know that this is their ticket out of poverty.

We see them with their individual trainers, who started with them at very young ages. Trainers typically receive 30 percent of their signing bonuses, which appears to be a lot, but they put their own money in to develop these boys. As one trainer put it, “We nurture and watch the seed grow, and then sell it.”

It was fascinating to see agents come into the process, and even admit to “brokering 16-year-old Dominicans.”

You see the pressure that is put on these young boys, who start training when they are adolescents. Lots of controversy has come out of the country due to families and agents falsifying their ages and names so that they can be signed at “16.”

Even scouts can be unethical and play dirty, and the filmmakers don’t shy away from exploring these practices. Rene Gayo, a scout for the Pittsburgh Pirates, plants the seed of doubt regarding Sano’s age for reasons that later unfold. What transpires for the youth once this doubt was planted plays out in front of the cameras, and absurdly ranges from bone scans to testing his mother’s DNA!

Narrated by John Leguizamo, Pelotero looks into the unseen underbelly of the game. Even if you aren’t a fan of the sport, there is drama and a story to follow. There’s a great soundtrack, with bachata booming in the background during happy moments, and an unexpected ending that keeps you on your toes.