Will Ferrell: Fine-tunes the News in Anchorman 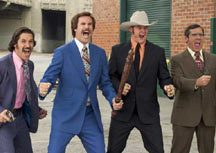 "I’m a professional. I let him lick my balls," says Will Ferrell, giving everyone a glimpse into his too-funny-for-words personality. Ferrell is, of course, referring to Baxter, his furry co-star and Ron Burgundy’s four-legged sidekick in the movie Anchorman: The Legend of Ron Burgundy.

Will Ferrell — yes, the man of 1,001 disguises known for his long stint on "Saturday Night Live" and roles in Old School and Elf — also shares the screen with Paul Rudd and ex-Bundy Christina Applegate in the film.

Judging from his college background, Ferrell would more likely have been the next Howard Cosell (the late sportscaster) rather than one of comedy’s funniest men. Ferrell graduated from USC with a degree in sports information, but his passion for performing overpowered his desire to become a sportscaster. He came close, though, with the role of egomaniacal Ron Burgundy.

Ferrell plays the chain-smoking, booze-guzzling womanizer Burgundy, who’s also the top newscaster at San Diego’s number one station, Channel 4 KVWN. "I based my character on an imaginary figure by the name of Walter Pembroke, a lieutenant in the French navy during the 1800s," says Ferrell in the trademark wise-ass demeanor he perfected so well during his years on "SNL." Yet the true story is, Ferrell didn’t base his character on a particular individual, but instead on a composite of men he studied while researching the role.

Ferrell co-wrote Anchorman with old pal and fellow "SNL" alum Adam McKay, who also directs. McKay has the same "wild guy" mentality as Ferrell, making it no wonder that the two get along so well.

"It’s just an amalgam of all newscasters that we grew up with, before there was cable. These people were like Gods," says McKay, about how he and Ferrell developed the film’s characters.

Aside from Applegate and Rudd, the Anchorman cast also includes Steve Carell (from "The Daily Show with Jon Stewart") and David Koechner. With such a talented comedic cast, the movie is a showcase of hilarious, off-the-wall antics.

"I just kind of keep myself quiet and I laugh a lot. That’s what I did everyday," says Applegate, who plays Veronica, the first woman on air, in Anchorman.

Ferrell says the idea for Anchorman came from time spent with McKay at a mountain retreat with a case of gin. While McKay quickly retorts, he does divulge that his research for the film consisted of watching old 1970s news footage, along with interviewing contemporary anchors. He was surprised at what he discovered.

"They kind of were more connected to the Edward R. Murrow tradition (of journalistic excellence). The people [nowadays] tend to be more bent on presentation," says McKay.

As is Ferrell’s Burgundy, who is heavily concerned with his presentation, and comes across like an early version of today’s metrosexual — paying too much attention to his physique, clothing and sexual prowess, the latter of which he tries to impose on Applegate’s Veronica.

Ferrell admits to being a part of a new unofficial club in Hollywood called "The Frat Pack," in which celebrity friends of actors take cameo roles in one another’s movies. "I love the name," says Ferrell. "We printed 25,000 T-shirts that say, ‘Get on board the frat pack train! It’s leaving the station.’" He also admits that he’s currently working on a new slogan.

Not counting his T-shirt business venture, Ferrell has been a busy man since his 2002 departure from "SNL." He currently has over 10 films in the works and, in early September, he’s scheduled to begin shooting his role as Darren Stevens alongside Nicole Kidman’s Samantha in a movie based on the popular 1960s television show, "Bewitched."

"It will be done in Kabuki theater and we’re just excited," Ferrell says half-seriously. He admits that he’s not familiar with Kidman’s work but has heard that "she has a cute little rear end on her."

Ferrell adds that he has only one complaint about a rumor being spread about him. "[The rumor is] that I’m not gay, and that pisses me off!" Now that’s one thing that will never be believed, but with Ferrell, who the heck knows?