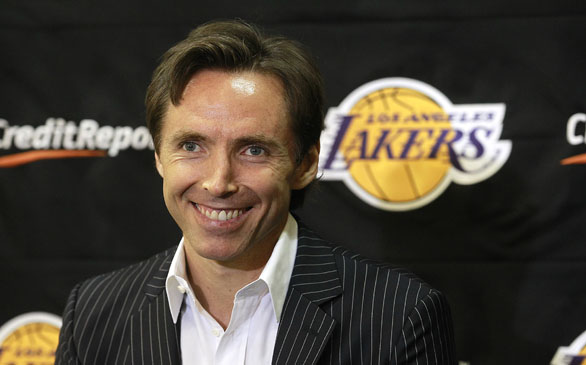 What's with Steve Nash's short haircut? That's so un-L.A. of him. Maybe he'll get his tips frosted like Prince Fielder. That's right, I said tips. But for the right price, they'll pretty much frost anything around here.

Welcome to Los Angeles, Mr. Nash. I think we might have a spot for you, especially if you can play a little third base. We'd also like to see what you can do opposite "Glee."

1. Look both ways before crossing the street.

2. Have your personal assistant cross the street for you.

"There's a level of panache that comes with that acquisition," says Peter Shankman, a branding and social media specialist. "If nothing else, it's going to give people something fun to talk about. Never underestimate the sheer magic that change can bring."

Now, "panache" and "magic" are terms we can relate to out here. Our new mayor is named Magic. And I think there might be a Pixar character named Panache. Or maybe that's my attorney.

The important thing is that the Lakers finally have a player to root for again, though you have to wonder how that acquisition scissored the brain waves of poor Derek Fisher. Ostensibly, the Lakers needed a younger point. Now they have an even older point. What's the point? Fisher must be beside himself.

Hopefully, he won't try to get his tips frosted.

"I think it's kind of a wake-up call," Shankman adds on Nash. "He's is going to come in with a level of enthusiasm that's been lost a bit."

Stealing a page from the NFL, the National Bling Association seems always in the news, even during the off-season. Usually, reading about the NBA in midsummer is a little like reading about the New Hampshire primary two years out. So much can happen.

But get a load of the NBA lately. First, they move a team to Brooklyn. That's panache.

Then Lamar Odom comes to the Clips, then Nash comes to the Lakers, then Ray Allen goes to the Heat. Add in address changes for Jason Kidd, Joe Johnson, Rashard Lewis ...

Honestly, the NBA gets more adorable by the minute. Stir in the recent musings by David Stern that the most elite players may never participate in another Olympics, and you have America's most popular new sitcom.

Because Mark Cuban has chimed in too. Always quick to speak up for the oppressed, Cuban laid out an elegant case that NBA players - long exploited and poorly compensated to begin with - should no longer volunteer for Olympic duty.

"If you look up 'stupid' in the dictionary, you see a picture of the USA Dream Team playing for free for corporate America so the U.S. Olympic Committee can make billions of dollars," Cuban spewed back in April. "And it has nothing to do with patriotism and it's all about money."

Well played, Mark. That kind of clear thinking is always going to get you noticed (Thomas Jefferson, Nostradamus, Daffy Duck).

"Leaving aside the perhaps small point that it's the IOC, not the USOC, that rakes in the big money from Olympic commercialism, it seems odd to me that Cuban, of all people, would be banging on about corporate greed," says author David Clay Large, who has written extensively and well on the Olympics. "Talk about the kettle calling the pot black.

"Finally, the curious notion of replacing the current Dream Team concept with a Baby Team made up of beardless youngsters makes no sense if the USA has interest in continuing to win gold medals," the author notes.

"Remember what happened in 1972 and 1988?" he says. "Young, untested college-based U.S. teams were bested by superior, seasoned Soviet teams."

Yes, Large acknowledges that the Americans supposedly won in '72, but in fact they were outplayed for most of the championship game by the Russians.

"Can you imagine the headlines on the world stage when the NBA no longer gives the Olympics its players?" he asks.

Actually, I kind of can.