Can't Sleep? It Could be the iPad 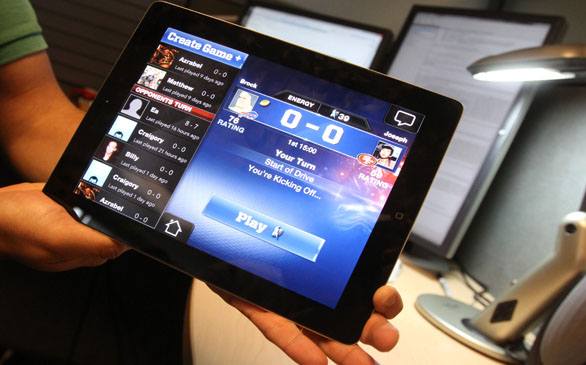 You could be losing sleep because of your desire to use an iPad at all times.
(Credit: Joe Burbank/Orlando Sentinel/MCT)

Like many of Americans, Amalie Drury has grown very attached to her smartphone.

The 33-year-old Chicago writer checks the device several times a day for Facebook updates and email messages. She brings it into the bathroom when she brushes her teeth. And she often totes it to bed, "just to check email one more time and play a few more rounds of Words With Friends."

If Drury wakes up in the middle of the night, she reaches for her phone again. "My first thought is to pick up the iPhone to see what's happening in the news," she said. "I'll ... sometimes read long features and not really be able to go back to sleep."

Drury's "terrible habits," as she calls them, reflect those of millions who bring their phones, tablets, e-readers and laptops to bed each night, according to consumer research. The trend is causing increasing concern in the medical community based on mounting evidence that the type of light produced by our portable electronic screens can contribute to sleep loss.

Last month the American Medical Association issued a policy recognizing "that exposure to excessive light at night, including extended use of various electronic media, can disrupt sleep or exacerbate sleep disorders, especially in children and adolescents."

Any light at night can be disruptive, researchers say, but in recent years studies have zeroed in on the particularly potent "blue light" emitted abundantly from the energy-efficient screens of smartphones and computers as well as many energy-saving fluorescent bulbs.

Because blue light is especially prominent in daylight, our bodies associate it with daytime, which may be why exposure to blue light can make us more alert and improve our response times. It also has been shown to suppress melatonin, a hormone that helps regulate sleep and is not produced during the day.

In May 2011, Swiss researchers at the University of Basel reported that subjects who spent time at night in front of an LED computer screen, as opposed to a screen emitting a variety of colors but little blue light, experienced "a significant suppression of the evening rise in endogenous melatonin and ... sleepiness."

Over the last decade, neuroscientists have discovered novel light-sensitive cells in the eye that detect light. These cells are separate from those we use for vision and contain a photopigment called melanopsin that is particularly sensitive to blue light. Scientists think this light-detecting mechanism, which regulates our sense of night and day and time of year, evolved before the ability to see.

"Blue light preferentially alerts the brain, suppresses the melatonin and shifts your body clock all at the same time," said Harvard Medical School sleep researcher Steven Lockley. "Your brain is more alert now and thinks it's daytime because we have evolved to only see bright light during the day."

Compounding the problem, Lockley and others said, is that unlike TV (which also emits blue light), these newer electronic screens are positioned close to our faces, increasing the intensity and effects of the blue light on our brains.

"The closer you have a light source to the face, the more intense it is," said Lockley, co-author of "Sleep: A Very Short Introduction." "And the further you go away, it falls off quite quickly. So having things close to the face is much worse than having a TV that's 10 feet away."

The researcher stressed that these types of screens are not all bad. When used during the day, they can help stabilize circadian rhythms and increase alertness and reaction time.

Increasingly, however, consumers are using devices that emit blue light well into the night. A recent poll by Rosetta marketing consultants indicated that today almost 1 in 3 Americans who use the Internet own a tablet and that 68 percent of them report taking the device to bed.

While tablet manufacturers remain generally quiet about the blue light issue - neither Barnes & Noble, which makes the Nook Simple Touch with GlowLight, nor Amazon, maker of the Kindle Fire, responded to requests for interviews - industry watchers and scientists confirm that some manufacturers are already developing new features to automatically modulate or remove blue light emissions at night.

Representatives of Apple note that blue light emissions can be reduced on the iPad by adjusting brightness and switching to white on black mode at night through the "settings" feature.

Other companies also are working on technical solutions. In 2005, after conducting early studies on the effects of blue light on sleep, researchers at John Carroll University in Ohio formed a spinoff company called Photonic Developments to market products that can mitigate blue light exposure. These include orange-tinted glasses, screen filters and blue-light-free bulbs, all sold at LowBlueLights.com.

"We have many people talking about the problem," said Richard Hansler, one of the scientists who developed the products, "but I'm surprised that so few have come up with solutions for it."

There is also a free computer program called f.lux - downloadable at stereopsis.com/flux - that reduces the levels of blue light coming from a computer screen later in the day.

Many people who use electronic media in bed told the Chicago Tribune they had trouble sleeping or suffered from insomnia, but others felt that streaming a sitcom, reading an e-book (especially in white letters on a black screen) or perusing Facebook relaxed them and could even put them to sleep.

Sheri Jacobs, who runs a marketing firm in Deerfield, is in the second group. Jacobs said she uses electronic devices mostly for entertainment and reading later in the evening, leaving email and other work-related tasks for the morning.

"I'm a great sleeper, probably because I run in the early morning and I'm exhausted by bedtime," Jacobs said. "I've heard about (concerns over electronic light at night) and so my approach has been to disconnect from the email at a certain point and use it for fun things like reading or watching videos."

Dr. Alon Avidan, who directs the Neurology Clinic at UCLA, recommends good sleep habits - bright days, dark nights - to everyone but says some people are genetically much more sensitive than others to the effects of light exposure.

"Some patients will watch TV and do computer work late at night and not suffer from insomnia or other problems," he said. "But other people have what's called hyperarousal. They can't go to bed without reading email, and then they have a hard time shutting their mind off. Those are the patients for whom light exposure is having a greater impact and who are genetically more likely to be affected."

He also notes that electronic media exposure is rarely the sole culprit in sleep problems.

"There are often many other factors involved such as stress, anxiety and sometimes restless leg syndrome," Avidan said. "So it's hard to say that the electronics are purely at fault, but they certainly aren't making things any better."

While it's clear that light exposure can delay sleep initiation, it's still unclear whether it can contribute to sleeplessness in the middle of the night. Also unclear are the exact light intensities that will trigger sleep disruption and whether adolescents respond to light exposure in the same way that adults do. The AMA and others have recommended further research into this still-young field.

Special Features
'Pikmin Bloom,' an AR step counter to improve your daily walk, is so simple it's magic
1,126 views

Special Features
Music, Gaming and Gambling: This is how online casinos pick the tunes for your study break
1,169 views

Special Features
You think it's not a college sport? Buckle up as esports is now a degree pursuit, too
597 views