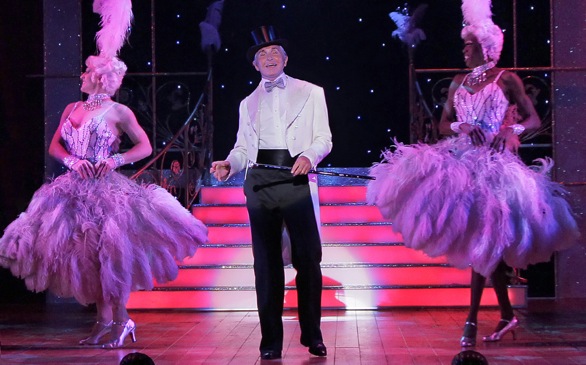 “La Cage Aux Folles” literally translates to “the cage of madwomen.” In a Broadway production, however, it translates to beach balls, shimmering dance numbers and lots, and lots of feathers.

Winner of the Tony Award for Best Musical Revival in 2010, it is back yet again, playing to at a fully packed Pantages Theatre Wednesday evening. “La Cage Aux Folles” may not seem as radical as it was when it first hit theater in 1983, but boy does it feel like there’s no better year for the flamboyantly heartwarming production.

The story? The familiarly tan and dapper George Hamilton plays Georges, the owner of a St. Tropez nightclub. Christopher Sieber fabulously (so fabulous that he’ll have you think that there’s no more acceptable use of the word) reprises his role as Albin, his partner who also moonlights as the glamorous chanteuse Zaza.

At first, the mismatched couple, with the help of the “notorious and dangerous Cagelles,” fool the unfamiliar (and those who didn’t take the time to glance at the playbill) into thinking that the story is a behind-the-curtain look (literally) at a drag production –which would have been enough for a comedy, but what “La Cage Aux Folles” strives for and successfully delivers is a lot more than laughter. What follows are heartbreaking scenes where their son, Jean-Michel (Michael Lowney), attempts to impress his future, politically conservative in-laws by passing his biological father, Georges, as a straight-laced retiree with Albin, who raised him as his own, out of the picture. There is no surprising plot resolution here: a rambunctious set of events has Albin pretending to be a real woman, who is then discovered with his wig off, cursed by the bride’s conservative father, and Jean-Michel with his girl on his arms finally owns up to his unique but nonetheless loving family. Although the storyline may not have any twists and turns, the execution is marvelous, garnering a much, much deserved standing ovation.

“La Cage Aux Folles” is running now through July 22 at the Pantages Theatre, 6233 Hollywood Blvd., Los Angeles. Tickets start at $25 and can be purchased by calling 800-982-ARTS or online here.