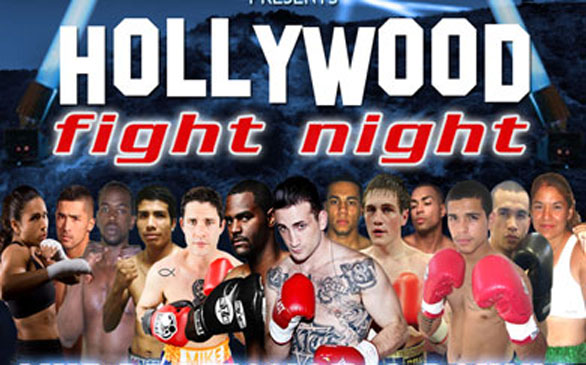 Hollywood Fight Night is about two things: boxing and Hollywood.

The latest attempt to bring the sport back to it’s Tinseltown glory days is a new series of fights sponsored by Bash Boxing, which premiered last night at the historic supper club Florentine Gardens. Not as glam as it was during the days of Bogart and Monroe, this contemporary version still brought a true array of Hollywood old and new: the hipsters were there, clad in vintage finery; the elders who grew up watching the sport came out for the event; the Russian crime bosses (maybe) brought along their stiletto-heeled dates; the designer lingerie-clad ring girls put on a show; and the kids who train at the local (world famous) Wild Card gym attentively watched their fellow sportsmen.

The nine fights featured local fighters competing against some out-of-towners. The Hollywood fighters stood their ground, taking almost all of the bouts of the night. Burbank’s Mike “Cool” Carracela won his Welterweight bout, as did North Hollywood’s Javier Albonica, who beat Japanese fighter Tatsuro Irie in a TKO. The only women’s bout on the card had Welterweight Holly “Lil Bear” Lawson beating Judy Garcia Tate of Arizona by a TKO in the second round. Welterweight Liam “Punch” Vaughan – originally from Liverpool, U.K. but now living in Hollywood – won a scrappy battle with Jovannie Rubia of Santa Rose, CA, which showed the difference between a boxer and a fighter, with Vaughan trying to stick to the basics of the sport, while Rubio lunged, held and laid onto him.

The skills of boxing were more apparent in the fifth bout of the night where Super Bantamweights Erik Ruiz and Raymond Chacon went head-to-head in a well-fought bout that showed their almost equal talents, with Ruiz winning by a slim decision. Two others who were well matched were Oxnard’s Oscar Diaz and Carlos “The Solution” Morales of East L.A., who eventually fought to a draw.

The evenings other Knock Out was also one of the most bizarre, with Sacramento's Larry Ward entering the ring in a boa, sunglasses and cowboy hat and showboating to the audience's derisive shouts of "Rick James" only to be embarrassingly knocked down twice really early in the first round by Toledo's Paul "Pay Per View" Parker, who was making his debut pro appearance. The crowd clearly wanted to see more of this strong Middleweight fighter. Another Ohio boy, Paul Parker also made his Pro debut in a winning bout over Larry Ward of Sacramento in a Cruiserweight fight.

The evening’s final fight, the main event, brought the crowd to its feet for former Golden Gloves champ and Wild Card-trained Zachary “Kid Yamaka” Wohlman, a poster boy for classic Hollywood style, who brought the haircut, the old school blue velvet trunks and robe, and new Hollywood tattoos to the ring. He fought a tough battle against Phoenix’s Joe Martell, who came to punch, but in the end won by a close decision. Wohlman has strong legs and a well-disciplined style that makes him stand out even against a hard fighter like Martell. He’s also got guts earned from life-long challenges, the faith of his newly discovered religion, and the talented team of Freddie Roach and Eric Brown to help build his career.