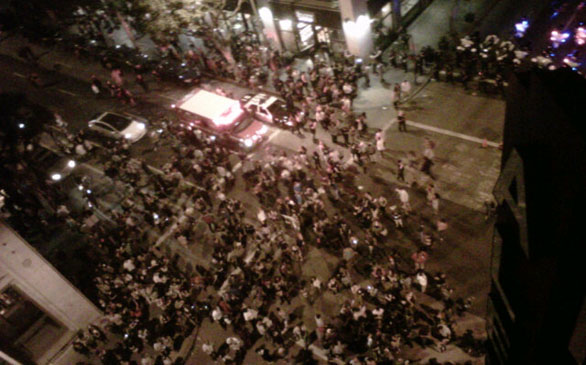 At least 17 people were arrested Thursday night when violence broke out at the monthly ArtWalk event in downtown Los Angeles, police said Friday.

Police had said earlier Friday that 19 were arrested but later updated the number.

Of the total arrests, nine were for vandalism, two for failure to disperse, two for assault with a deadly weapon, two for resisting arrest, one for receiving stolen property and one for assaulting a police officer, they said.

About 140 officers were called in to assist the LAPD Central Division with dispersing the crowds. Four officers were hurt and treated for minor injuries. One officer suffered a minor concussion after being hit in the head by an object thrown by the crowd, police said.

The clash appeared to have started shortly before 10 p.m. Pacific time from a demonstration using sidewalk chalk drawing as its means of expression, witnesses said.

Shaimaa Abdelhamid, 22, who identified herself as a member of Occupy L.A. - a protest movement that started in New York over wealth disparity - said protesters attended ArtWalk to show support for people previously arrested for drawing on the sidewalk with chalk.

A posting on Facebook advertised a demonstration event planned as "Chalk Walk."

"They're harassing us and trying to get us away from the CCA (Central City Association) building," Abdelhamid said.

Multiple people previously had been arrested for chalking in protest, with at least one in front of the Central City Assn. building, Abdelhamid said.

"Drawing with chalk on the ground is considered vandalism. They were drawing on privately owned buildings and sidewalks," said Norma Eisenman, a spokeswoman for the LAPD. "It is a crime."

Police arrived at the intersection shortly before 10 p.m. to disperse crowds that had gathered on Spring Street between 4th and 5th streets. Officers in riot gear systematically moved the crowd away block by block and had been authorized to use less-lethal munitions, such as rubber bullets, bean bags and baton strikes.

In response, the crowd threw bottles and cans at officers, screamed obscenities and chanted, "Whose streets? Our streets!"

Barrie Wild, 50, of West Hollywood, was at 3rd and Spring streets when crowds came rushing past him, running away from officers.

"I came here for the ArtWalk, instead I'm getting street theater from the LAPD," Wild said.