Chart-Topping DJ Kaskade is Calling on All Freaks of Nature 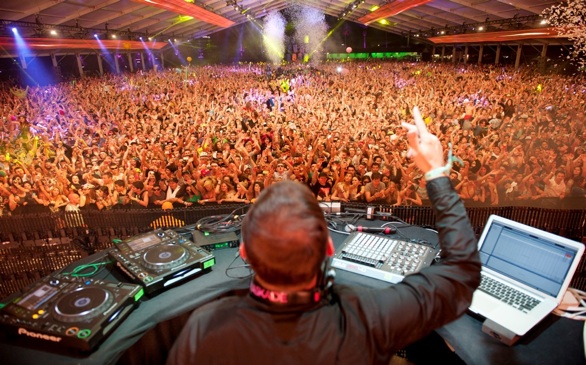 It’s impossible to talk about electronic dance music without talking about Kaskade, who is most definitely one of the pioneers of the genre as we know it today. Since releasing his first single in 2001, Kaskade has been touring tirelessly and creating an impressive catalogue of music that now includes seven albums, with his latest, Fire and Ice, dropping in 2011.

Although demonstrating consistency musically (“It’s always been euphoric-sounding, so I think there’s common thread throughout my music, and lyrically, it’s all been in the same kind of zone,” he says), the person behind the DJ booth is rather surprising.

The 41-year-old Chicago native, born Ryan Raddon, is actually a married father of three, and a practicing Mormon who doesn’t drink or do drugs. He’s also eloquent, thoughtful and pensive, pausing for a moment to think before answering any questions.

For Kaskade, the transition from Ryan Raddon to the Pioneer DJ and DJ Times’ 2011 winner of “America’s Best DJ” was a gradual one – a “slow burn” as he puts it – but he’s loved the whole journey, fueled by a long-time passion for the music.

Growing up in one of the cities where electronic music originated, Kaskade naturally gravitated towards the new wave bands of the ‘80s, citing the Cure and Depeche Mode among his early inspirations.

“It just seemed like a natural transition [to creating music] because the stuff that I was listening to, a lot of it was electronic in nature, and early house music was fairly simplistic,” he explains. “I was like, ‘I understand it and I love it.’ It didn’t seem like it was too far-fetched, studio-wise –it seemed like I could get the equipment to make this music. So I started saving up money and slowly collecting equipment, and making tracks. It kind of went from a really passionate hobby, playing records for my friends, to writing my own music and playing records for bigger and bigger crowds.”

The increasing crowds have now reached immense proportions: Kaskade will be the first ever electronic dance artist to headline the Staples Center at the end of this month, and he will be playing to a sold-out audience. This is certainly indicative of the meteoric rise in the electronic dance music genre that has occurred in the last couple of years.

“It’s just awesome,” he says of the newfound popularity of EDM. “I’ve always loved the music and had passion about it, so it’s cool to see other people discover it and love it as much as I do.”

A veteran in the current DJ landscape, Kaskade is certainly owed some credit in the seemingly sudden breakthrough of the genre.

“There’s been a lot of people like me, who have been touring relentlessly for a long time, doing club shows and turning people on at the grassroots level,” he explains. “I feel like playing Nashville and all these little cities for so many years has to have had some effect; it’s slowly built momentum.”

Much like the movement itself, Kaskade’s music seems to be growing and building as well, leading up to the release of Fire and Ice, a dual album that includes up-tempo and down-tempo remixes of each song, including lead single “Eyes” and club favorite “Turn It Down.”

“There’s a lot more energy in my music, as I listen back over the 10 years of putting out records,” reflects the chart-topping producer. “I think sonically it’s just gotten larger. It just sounds much bigger because it’s geared toward bigger audiences.”

To accommodate for the larger crowds, Kaskade has been remixing and re-producing some of his older tunes to make them more “dynamic and exciting” for his current Freaks of Nature tour, which includes over 50 stops throughout North America.

“This show that I’m doing right now, it’s much more like a concert than anything I’ve ever done in the past,” says the masterful remixer. “A lot of people would go to my club shows and say, ‘You didn’t play enough of your own music!’ This show, it’s my music from the beginning to the end.”

While he truly loves touring – remarking, “I realize that that is a unique opportunity with this job that I have, and I feel really lucky to have those experiences in all those different places” – Kaskade acknowledges the importance of finding a balance between performing and creating.

“I can tour for a while, but I always feel the need to get back into the studio and write music,” he explains. “I always get inspired when I’m on the road; it’s when I’m thinking of my next song.”

The accomplished DJ finds his inspiration from everyday occurrences and poignant memories: “Breaking up with girlfriends, finding love, things that shape us as human beings, the simple things –I just never really get too specific, it’s more abstract. My music is not that deep or profound. I’m very honest and true, but I’m not Shakespeare or anything like that,” he jokes humbly.

While we may have to wait until the end of next year for a new album – Kaskade plans on returning to the studio when he wraps up his tour at the end of the summer – in the meantime, those of us fortunate enough to score tickets to the sold out Staples Center show can look forward to what is sure to be an epic dance party.

“My shows are about coming to this place, and forgetting about everything else that’s going on in your life. It’s getting this big group of people together and having a celebration of life. It’s about coming there, celebrating with everybody else and letting go.”

Kaskade will be playing a sold-out show at the Staples Center on July 27. His latest release, Fire and Ice, is available now. For more information, visit his official website, Facebook and Twitter.