Cadillac Ranch: The Quirky Side of Amarillo, Texas 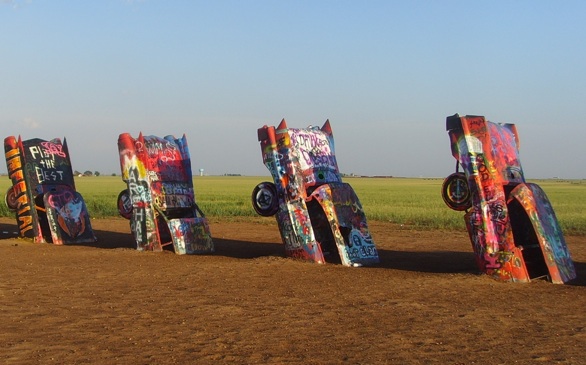 Leave your own mark on this unique art instillation.
(Credit: Kevin Wierzbicki)

One of the perennially most-popular of American road trips is the journey along old Route 66, the once vibrant “Mother Road” that has its eastern terminus in Chicago and its western end at the intersection of Lincoln and Olympic Boulevards in Santa Monica. The highway traverses eight states and covers more than 2,400 miles along the way, and just about at the half-way point sits Amarillo, Texas. The city is not only famous for being name-checked in the song “(Get Your Kicks on) Route 66,” but also for the important role it's played concerning the nation’s railroads, the oil and gas boom, cattle production and general all-around cowboyin’. Amarillo is definitely a no-nonsense city when it comes to getting work done, but it also loves to show off its quirky side. How many cities, for instance, have a major attraction where visitors are encouraged to create graffiti?

Cadillac Ranch is an art installation located in a cattle grazing field on I-40 just outside of Amarillo, where 10 vintage Cadillacs are aligned in a neat row and interred in the earth, all at a similar depth and all at the same angle. The “art” is curated, so to speak, by eccentric philanthropist Stanley Marsh III, but in essence it belongs to all people, many of whom alter it on a daily basis. Over the years the cars have received countless coats of paint courtesy of anyone who cares to wield a spray can, whether they want to create an amusing piece of art, scribble a slogan or simply tag one of the structures with their name. It hardly matters, since someone else will be along shortly to paint over any creation. To think that someone has gone through the trouble to install these old cars, so precisely and sort of in the middle of nowhere, is entertaining enough. To bring a spray can and make the installation your own, however fleetingly, is truly one of those “only in America” moments. Spraying the cars is legal, but there’s a gate that separates the field from the highway shoulder; do not use your paint on anything outside the gate. There’s a Home Depot on the way out to the site, and they are used to selling paint to the Cadillac Ranch-bound graffito. Make sure also to haul out your spent spray cans, as there are no trash receptacles at the site, which is open every day during daylight hours.

In addition to the one-of-a-kind Cadillac Ranch, Amarillo has numerous other worthy attractions, including several very good museums focusing on the west and local flavor, including the Panhandle-Plains Historical Museum, the Kwahadi Museum of the American Indian and the American Quarter Horse Hall of Fame and Museum. But still, there’s that quirky side, and the RV Museum at Sisemore Traveland is a place that ties in perfectly with a Route 66 road trip. Just as the museum’s moniker indicates, the place is full of vintage RVs, ranging from big Winnebago-types to small and unique camper vehicles. You can go into the big ones, and they’re all decked out with furnishings of the era, some with shag carpeting and other touches that make it easy to envision a family like the Brady Bunch happily motoring along. Also on site is a serious piece of film memorabilia –the 1948 Flxible bus used in the Robin Williams movie RV, where you can pose for a picture sitting in the driver’s seat from which Williams navigated the highway as head of the Gornicke family. Also on display at the RV Museum is a selection of vintage cars and motorcycles; you can see it all for free.

Of course, all your Amarillo sightseeing is going to make you hungry. If you get so hungry that you think you can eat a meal as big as Texas, then you should roll into the Big Texan Steak Ranch. This is one of those places where if you can eat a 72-ounce steak and all the trimmings all by yourself in one hour, then you don’t have to pay for your meal. The Big Texan has been around since the 1960s, and the big steak thing has been their gimmick for a long time; many try and some succeed. Just be aware that if you want to give it a try, you’ll be putting on a show for the rest of the restaurant as you’ll consume your food at a raised table where everyone can monitor your progress as a digital clock counts down your 60-minute window. Who knows, you just might make some history of your own during your Amarillo and Route 66 road trip.