Youngest Woman to Head a Brewery is Taking the L.A. Craft Brand to New Heights 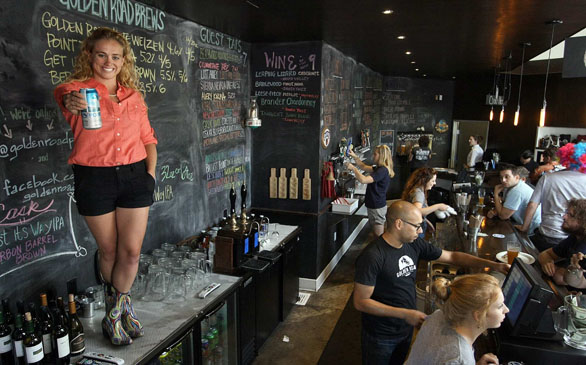 Meg Gill strides across the floor of the pub at Golden Road Brewing with easygoing authority. She wears colorful rubber cowboy boots, a pink shirt and very short black shorts - and her wavy blond hair cascades down her back. Customers stare at her over pint glasses filled with frothy Point the Way IPA.

At age 27, Gill is reportedly the youngest female brewery owner in the world, having co-founded Golden Road with Mohawk Bend owner Tony Yanow nine months ago. Golden Road is already the biggest craft brewery in L.A. County and among the fastest-growing start-ups in craft beer history. It is on track to produce 8,000 barrels annually and has begun canning its beer (a rare accomplishment in the world of craft beer). In less than a year, Gill has secured 400 draft accounts in Los Angeles and more than 1,500 retail accounts, including Trader Joe's and Whole Foods.

But her most noteworthy achievement is obtaining seven distributors for Golden Road's beer, including Ace Beverage, which distributes Anheuser-Busch and has since hired a craft brand manager and representative. Cracking the distribution code, which favors big-name brands and big-time money, has been craft beer's greatest challenge, particularly in sprawling Southern California. It's just fine to make a delicious beer, but if you can't get it on store shelves you can't grow.

Gill knows how to drive distribution, say those who work with her, and she's paving the way for a craft beer scene in Los Angeles as robust as the one in the Bay Area, where she worked before heading south for Golden Road.

"Craft beer is still just 5 percent of the market in L.A.," says Gill, sipping a sour beer in the brewery's Glendale offices.

"That's just below the national average. But in San Francisco, it's at 20 percent. So I just fell in love with the idea of the L.A. mission and challenge."

It's a challenge that has brought her to the attention of Kim Jordan, president of New Belgium Brewing and the female powerhouse of the craft beer world. In May, Jordan asked Gill to join her on a Craft Brewers Conference panel on marketing.

"Meg Gill is a force - wrapped in a smart, surfer girl, no-messing-around style," says Jordan. "I can't wait to watch her as she masters the beer industry. It's sure to be spectacular."

"We brought in 30 bars and the biggest distributors in L.A. before we had a product and said, 'Help us build a brand,'" recalls Gill. "That's what made the distribution and retail so successful. I don't think that Tony and I have done 1 percent of the work; it's been the community. This is the beer that L.A. built."

That's not to say it has always been smooth sailing for Golden Road. It's notoriously difficult to make money off of a craft brewery, and although Yanow thinks Golden Road is on track to do just that, it hasn't yet. There are also the naysayers, those in the scene who say that Gill and Yanow have poured out more than they can drink and that attempting to build a successful craft brewery in L.A. on the scale of Golden Road is just plain crazy.

"We've never listened to what other people have said or we wouldn't be here," says Gill. "But Tony and I have been steadfast in our belief that L.A. needs a local craft beer. There are 10 million people in this county, and we're the only (local craft beer) you can find on a supermarket shelf, and we're not even in the big stores yet."