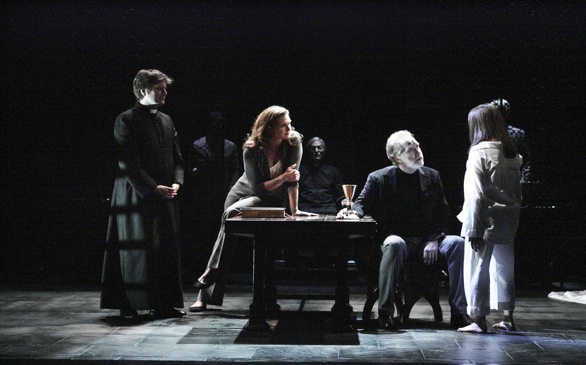 Sitting through a 90-minute live stage incarnation of “The Exorcist” that lacks the anticipated projectile vomiting, head spinning, or any of the other good stuff one is entitled to expect (not to mention the absence of an intermission) may just convince a non-believer that maybe the devil does exist –perched on a beam in a playhouse snickering, playing tricks on the audience and an otherwise good cast.

The list of accomplished names behind the production is no joke: about half the team, including director John Doyle, are Tony-award winners, and Brooke Shields, who plays the distressed superstar mother, is well, Brooke Shields. Even magician Teller of Penn & Teller consulted on the stage play (there might have been some impressive levitation involved). So why, on Thursday night at the Geffen Playhouse, did it seem that the audience was a bit more tortured than the possessed Regan on stage?

The aforementioned lack of gore might have been a better choice to avoid gaudiness, but at least it would have kept the crowd from dozing off. As if the director realizes this towards the end, blood feebly trickles down from a suspended giant crucifix above the stage. Twenty-something Emily Yetter as the young, unfortunate one is convincing with her small frame, voice and body language. Without the sinister made-up face that the film made so indelible however, the character falls short of being remotely threatening.

The script is an adaptation of the novel, not the movie, hence the few little breaks from the original plot. However, the play still delves into the world of unnecessary tellings of good versus evil. Here, the good fails to connect and is unsympathetic. No matter how cute little Regan is and how striking Brooke Shields still manages to be, I couldn’t have cared less if the devil took them both. Evil, on the other hand, is not nearly scary enough (save for the sound effects, which are admittedly startling).

This stage production of “The Exorcist” is a solid effort, but some horror classics are better to be left alone in your Netflix queue.

"The Exorcist" is playing now through August 12 at the Geffen Playhouse, 10886 Le Conte Ave., Los Angeles. Tickets start at $70 and can be purchased here.