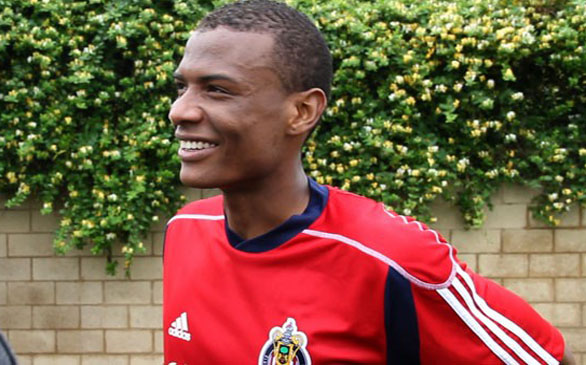 Colombian Jose Erick Correa is one example of many foreign players in the MLS.
(Credit: cdchivasusa.com)

When Colombian teenager Jose Erick Correa arrived in Southern California three months ago, he acknowledges he felt out of place.

Well, not everything. The soccer pitch must have seemed pretty much the same to Correa, who scored goals in his first two games with Chivas USA.

And he's not the only Colombian who has made himself at home on the playing fields of Major League Soccer. There are three others on the Chivas roster alone. With 33 players in the league overall, Colombia is second only to the U.S. in terms of representation in MLS, where 12 of the 19 teams have at least one player from the South American country.

"This market has become very attractive for not just Colombians, but everybody," says Chivas striker Juan Pablo Angel, a former Colombian national team star who helped put the league on the map in his homeland. "If you look back in the last four, five years, the exposure of the league has grown dramatically. So the general players have become more interested in what's going on in MLS.

"As a result, the interest from all over the world has grown."

But nowhere has it grown faster than in Colombia, whose 18-team domestic league can't compete with the salaries and social stability that teams here can offer. It helps explain why 20 of the Colombians in MLS are first-year players - including four who, like Correa, joined their teams after the season started.

"Obviously it's a factor," says Chivas assistant coach Carlos Llamosa, one of the first Colombians to play in MLS when he joined D.C. United in 1997. "Only three or four teams in Colombia you get paid good salaries. The lifestyle is better, it's more secure."

That would seem to be true for players from several African and Latin American countries as well. But only Brazil, with 18 players in MLS, and Jamaica, with 14, have rivaled Colombia in terms of their impact on the league.

One reason is the kind of players Colombia has sent north.

They tend to bring flair and rhythm to their teams, but they're also physical enough to stand up to MLS-style pounding. (At 6 feet 1 and 190 pounds, Correa is the largest outfield player on the Chivas roster.)

"They're physical, but they're smooth with the ball," Chivas General Manager Jose Domene says. "That's why it fits well."

And not only are they good - last year FIFA ranked Colombia fifth in the world in international transfers -but they're also coachable and conform quickly to the MLS.

"Generally, Colombian players are very gifted technically," says Angel, who ranks among the top 20 scorers in MLS history with 71 goals in 142 games. "The players that have come here in the last few years have shown how well they adapt. Not just to the culture but also to the style of play."

"It's the job that former Colombians did in this league in the last 10 years. Guys like Olave, Ferreira, Montero," Llamosa says, referring to Jamison Olave, the MLS defender of the year in 2010, David Ferreira of FC Dallas, who was the league's most valuable player that season, and All-Star Fredy Montero of Seattle. "They opened the door for other Colombians. The coaches, the players, they're always looking to MLS. And this is a good chance to show (off) to European teams as well."

To help ease the transition for Colombians coming north, most MLS teams offer players help in finding housing, learning their way around, even how to set up a cellphone plan. The Portland Timbers, for example, have a staff member on call around the clock.

"It's a big culture shock," says Domene, who struggled with the change when he moved from Mexico to the U.S. "Some of these guys have never seen highways that are six, seven lanes deep. You go to an Ikea, it's like wow."

For Correa, who turns 20 this week, that shock was eased by the fact that Chivas has more Colombians than any MLS team but Portland, which has five. That's a huge change from when Llamosa broke into the league and was the only Colombian on his team.

"It is a big help for a young player," Correa says in Spanish. "I'm learning more and more every day. I'm getting comfortable here."

And so, apparently, are many of his countrymen.