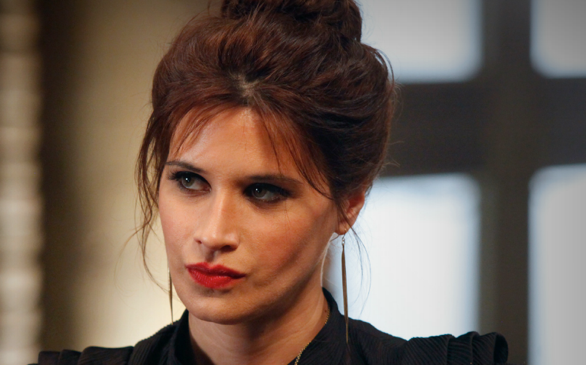 After seeing the preview shown at Comic-Con, we are bracing ourselves for the craziness that the rest of the season will bring –and it starts now with the return of Russell Edgington. Plus there’s the Ifrit, supe hunters, werewolves, fairies and angry Tara to worry about.

The episode begins where it left off, with Russell appearing helpless until Alcide gets pulled out of the room by what turns out to be another werewolf. Eric and Bill are soon attacked by wolves too, leaving Sookie to Russell’s mercy, but thankfully he doesn’t have time to sink his teeth in, as Sookie uses her fairy powers against him. Eric moves in for the kill, but Bill stops him, knowing that their orders were to take him alive. Suddenly, Authority officials appear headed by chancellor Kibwe, and they take Russell back to headquarters. In the meantime, Kibwe orders Eric and Bill to glamour Alcide and Sookie. Of course, Sookie cannot be glamoured, so instead Bill fakes it, and the two share a moment that brings us back to the good ol’ Sookie/Bill days. Eric isn’t quite over Sookie either (despite his “fuck Sookie” attitude), and when he makes Alcide forget, he also glamours him to protect Sookie with his life...and keep his hands off her. But don’t worry, Sookie soon catches on and unglamours him, leaving the possibility of another hook up with the sexy wolf. Sookie and Alcide were the lucky witnesses though, seeing as Kibwe herds all the others into a bus only to be slaughtered.

When Eric and Bill return, they are greeted with congratulations from the chancellors, having won them over with their successful capture. Roman appears wearing a quite tight-fitting blue polo. Bill continues to kiss ass, making religious comments and declaring his dedication to mainstreaming. But bad boy Eric isn’t buying it, instead declaring himself a pacifist. Roman just chuckles, having more important things to attend to –like executing Russell. As Russell is being taken from his cell, Eric visits Nora in her cell. She ignores him, and chants like a madwoman until she hears that Russell is to be executed, and exclaims, “It’s finally happening after all this time...God’s plan.” Before we can figure out what that plan may be, Roman is making another speech about mainstreaming and peace. He prepares to execute Russell with the iStake –but it doesn’t work. It appears that Russell was not subdued by silver like Salome said, and he is strong enough to stake Roman, exclaiming “Peace is for pussies.” Is the Guardian really dead after just six episodes?!

Back in Fangtasia, Tara and Jess’s fight ends with Tara kicking Jess’s ass until Pam intervenes. Dragging Tara to the kitchen, she compliments her, only to add, “I’m proud of you...the way a human is of a well-trained dog.” Will Pam ever warm up to Tara? Meanwhile, an embarrassed Jess gets confronted by Hoyt, and an awkward conversation between exes ensues. Hoyt is convinced she is still in love with him, which Jess denies, but Hoyt isn’t having it. Instead, he pathetically pleads that she love him, or even use him as a sex slave. Poor Hoyt, what happened to you? Jess rejects him (again), and instead he settles for another vamp who feeds on him in an alley almost to the point of killing him –not that Hoyt is protesting. But suddenly, a van full of supe hunters pulls up and kills the vamp right in front of Hoyt. Stunned and covered in blood, Hoyt doesn’t move, and one of the masked gunmen recognizes him and pulls him into the van. Who are these people? Will Hoyt go from a fang-banger to a vampire hunter?

Sam and Luna are rushed to the hospital after being shot, and wolf puppy Emma makes it safely to her grandma’s. Martha takes Emma to see her mom at the hospital, and Luna starts to warm up to the werewolf, asking her to take care of Emma until it’s safe. But is Martha trustworthy? When Sam gets out of the hospital, he asks Andy if he can help with the investigation, knowing that his shifter senses would be a great help. Andy agrees, and they go to purchase the same wooden bullets with a silver core that were shot at Sam and Luna. Andy interrogates the shop owner, who responds by trying to kill him, but Sam sees it coming thanks to his animal instincts. With supe killers on the loose, maybe the time has finally come for werewolves and shifters to work together (...and vampires too?).

Back in Fairy World

While Sookie is having a pity party (I wish I had a normal life, men suck, blah blah blah), Jason has another dream about his dead father who tells him, “The only thing you have to fear is...” before the dream is cut short. What does Jason need to fear? Fairies, vampires –possibly the vampire who killed his parents? Jason tells Sookie about the fairy nightclub and what Hadley said about their parents. Sookie says that they need to go back to the nightclub and save Hadley and her son Hunter, but when they get there, Hadley tries to convince them that they’re safe. They also meet Claudine’s brother Claude (their parents weren’t very creative), who reveals what really happened to the Stackhouses. Turns out that they were killed by a mysterious vampire who smelled Sookie’s blood on a Bandaid in the back seat of the car. Sookie refuses to believe it and freaks out, using her fairy powers, which isn’t as useful against a club full of fairies.

After Sookie unglamours Alcide, he remembers the V-addicted wolves that helped Russell, including J.D., the new master of Marcus’s old pack. Alcide goes to the pack, declaring that he wants to claim the role as pack master and challenges J.D. Alcide is backed up by one of the women in the pack. The dogfight is sure to come soon, which probably means another shirtless Alcide scene to look forward to.

Watch a preview of next week’s episode here.