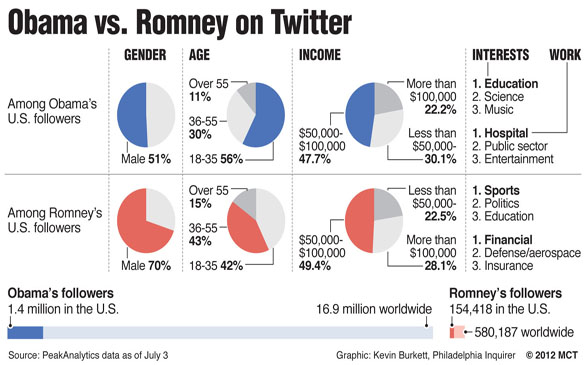 The Republican and Democratic parties think so. In this tight presidential race, a national battle is on. And the ammo includes thousands of tweets, 140-character messages shot off to hundreds of thousands of followers, a blizzard of news, talking points, zingers, datelines and instructions to the faithful.

Nowhere is it fiercer than in Pennsylvania. The commonwealth has lost 45 percent of its electoral clout since 1932, and it hasn't backed a GOP presidential candidate since 1988. But in a year when every electoral vote is golden, Republicans swear it's in play and Democrats are fighting as if it is.

As Kirsten Kukowski, spokeswoman for the Republican National Committee, says, Twitter "has become how news gets started, and how that news is amplified."

How do their strategies differ? For Team Romney (@MittRomney), it's a way to broadcast talking points. For Team Obama (@BarackObama), it's for grassroots organizing.

Michael Stricker, director of social media strategy for Webimax, a media consulting firm in Mount Laurel, studied a few hundred tweets from each camp in the last month. Based on that, he says Romney tweets are aggressive (45 percent negative) and almost always have links to articles, news, and videos for users to share: "@BarackObama's health care promises have fallen short. RT (retweet) and share this infographic if you agree http://mi.tt/Mq9IHJ";

Obama's strategy is to stay positive and personable (tweets from the presidential BlackBerry are signed "-bo"), and to keep his huge Web-spawned organization organized: "We'll be live-tweeting the President's speech on @Obama2012 - follow along for the latest." He, too, stays on the attack (35 percent negative), suggesting that, as Stricker says, "there do not appear to be any 'kid gloves' to be removed."

Thanks in part to the historic 2008 organizational effort that netted more than 13 million supporters, as of July 3 Obama (1,412,126) enjoyed an advantage of almost 10-1 among self-identified U.S. residents over Romney (154,418), according to PeekAnalytics, a social-audience measurement firm in New York.

Each party has a Pennsylvania Twitter strategy, too, customized down to the county, even to the precinct. While total Twitter followers for Obama outnumber those for Romney by 8-1, at 47,102 to 5,147, the state GOP Twitter account (@pagop) has a slight edge (3,865) over the state Democrats' @padems (3,716).

The GOP is working to leverage that advantage. (As Valerie Caras, director of communications and technology for the Pennsylvania GOP, says: "We blow them away on Facebook, more than 17,000 (likes) as opposed to 5,000; we're the sixth-biggest state GOP presence on Facebook.")

Like the national party, @pagop offers talking points and memes, plus links to instant Web videos by the party. One July 3 tweet does both: "After $5 Trillion in new debt, it's time to fire @BarackObama," and includes a link to a video. Stricker calls the tone "fairly strident."

The Pennsylvania Democratic Party, @padems, does much the same, with a stronger organizational thrust, urging followers to do something, be somewhere: "Have you gotten your ticket to see @BarackObama on Friday in Pittsburgh? Find out where to pick up your ticket." But they fight, too: Stricker says @padems "frequently take a bulldog stance."

Remember when Obama said "the private sector is doing fine" in a June 8 news conference? "We invented the hashtag #doingfine even before he was done speaking, and it went wildfire," says the GOP's Kukowski. A hashtag lets users search Twitter for tweets on a specific topic. The hashtag #doingfine helped ignite widespread mockery of a purportedly out-of-touch president.

The RNC was out with a video within minutes. "And we pushed that on Twitter," says Kukowski.

Reacting to the redistricting map by the Republican-controlled state legislature, Democratic tweeters created the hashtag #pagerrymander.

"That was one of our most successful social media campaigns, Twitter, Facebook, and a microsite just on redistricting," says Lindsay Frichtman, social-media director for the state Democrats, from her Philadelphia office. "Everyone said the new Seventh District looked like a pterodactyl."

The Dems say #EtchASketch; the GOP counters with #doingfine; the Dems see that and raise it with #dogontheroof. The GOP comes back with #ObamaDogRecipes, since in his memoir "The Audacity of Hope" Obama says he may have eaten dog while growing up in Indonesia.

Tweeters tweet "as many topics as possible, as often as possible," says the GOP's Caras. Adds the Democrats' Frichtman: "It's not like another medium, where you put something out there and check later. With Twitter, if your followers don't hear from you frequently, you're not using it the right way."

According to the website Twitter Counter, @pagop spikes in response to news, as on June 8-10, after "doing fine," or June 28, when the Supreme Court upheld much of the Affordable Care Act. @padems spikes to news as well, averaging eight to 12 tweets a day. All the while @BarackObama (10-20 a day) and @MittRomney (3-5 a day) send out their own barrages.

Who's the audience? The faithful, the committed. "We're not sending persuasion messages," Frichtman says. "We're tweeting to already engaged people who want to know, get out, and do something active in the campaign." Caras calls social media "gateways to the party. First, we get you to like us. Then read something. Then volunteer."

Caras says the faithful are not as young as social-media users in general: "Some of our top-tier activists, constantly retweeting our content, they're of an older generation." Frichtman says: "These are people who speak Twitter, who speak politics. They're all ages."

Stricker, of Webimax, studied the Twitter branding strategies of the national and state parties. Romney's followers each retweet content more than Obama's. But @BarackObama, Stricker says, is mentioned throughout Twitter three times as often as @MittRomney, and total retweets can run more than 30-1 for Obama.

Romney's tweets focus on jobs, aiming for the "provocative statement, an embarrassment for Obama's administration ... and thus highly engaging for Republicans, fueling their campaign fervor," Stricker writes via email. It's "about chipping away at the reputation of the incumbent" and uniting the base.

Obama's tweets give a better sense of the candidate, says Stricker, and his relations with other people, even those who are critical. Maybe that's striking a familiar, humble tone, speculates Stricker - or it's a way to blunt or absorb criticism.

Stricker says the issues for Romney tweets are (a) to give a better sense of the man and his human connections, and (b) whether users really will retweet as much as hoped.

For Obama, the challenge is to balance style (looking good) and pugnacity. "The balance should not shift too much further," Stricker writes, "or the campaign may trade informing for offending."