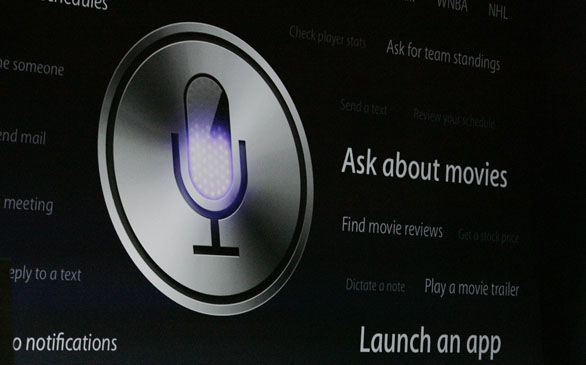 Using Apple's Siri on the iPhone to text hands-free could will be legal starting in 2013.
(Credit: Gary Reyes/San Jose Mercury News/MCT)

Siri, can I text while driving in California?

Not yet, but starting next year it will be legal - as long as you don't touch your phone.

With little notice, Gov. Jerry Brown on Friday signed a bill that will allow Golden State drivers to use Silicon Valley's "hands-free" technology to text behind the wheel for the first time since driving while texting was outlawed more than three years ago.

But the new law is so murky that already there is confusion over which devices will be legal, while some safety officials fear any type of texting will make the roads more dangerous.

Starting Jan. 1, cops will allow you to send, dictate and listen to text messages while driving, but only if you're using a separate, voice-activated device that's connected to your phone - something like a headset or Bluetooth earpiece or a program inside your car like OnStar. Just turn on the device, say "text mom" and talk out the message. If your mom is driving, her earpiece will blurt out the message.

"There's all this brand-new technology coming out that people want to take advantage of and use, and under current law they are unable to do that," said the bill's author, state Assemblyman Jeff Miller, R-Corona, who said his "Freedom to Communicate" act - sponsored by the auto industry - is aimed at families.

On Friday, after much head-scratching and acknowledging nobody in Miller's office owns a Siri-equipped iPhone 4S, the assemblyman's aides concluded it will still be illegal to use your actual phone to text behind the wheel - even by speaking the message directly into Siri.

The California Highway Patrol confirms that just the act of turning on the phone or selecting the phone's hands-free text app, like pushing the Siri button or Google apps on Android phones, is enough to warrant flashing lights in your rear-view mirror and a $100-plus ticket. Same thing goes for using your phone to read texts.

"The phone can't be in your hands," said CHP spokeswoman Jaime Coffee. "Hands-free is the key."

Remember: Your phone is lava, don't touch it. But it's legal to touch fancy digital stuff in your car and behind your ear that connect to your phone - and apps like Siri - to talk and soon text by voice.

"The most important thing to do when you're driving is to drive," Coffee said. "It does take your attention away, whether it's hands free or not."

The law is similar to the ban on cellphone talking while driving, which prevents drivers from dialing a number on their phone and then talking on speaker. After a 2006 bill from state Sen. Joe Simitian, D-Palo Alto, California drivers can only chat on their phones using a hands-free device like a Bluetooth.

"The larger trend is that these laws get passed pretty quickly or by people who don't understand the technology," said Glenn Abel, whose Hands-Free Info website has been tracking distracted driving laws around the nation for five years. "And they're finding that once they get these laws into the field, there are problems, so they come back and try to fine-tune everything."

Clearly, the technology is too quick for the California Legislature to keep up. And vice versa.

When this newspaper asked Siri: "Siri, is it OK to use Siri to hands-free text in California," she at first answered: "I don't know. Should I surf the Web for an answer?"

Asked a second time, Siri flashed a text message with the contents, "In California," and asked back: "To whom shall I send this message?"

The Legislature sent the new bill, AB 1536, to the governor after nearly unanimous approval and backing by auto makers eager to integrate more gadgets and connectivity devices into their vehicles.

California is one of 39 states that bans texting while driving, though it's unclear if any of the others allow hands-free texting.

But is hands-free texting safe? Studies have generally shown that distracted driving is a real threat. Experts disagree, however, over whether the danger lies in the physical distraction - taking your hands off the wheel and eyes off the road - or the mental one, where phone and text conversations take your mind off driving.

Hands-free texting can be especially tricky, especially if your phone doesn't recognize what you're saying, which can cause a simple "I'll be there in 5 minutes" text to take five minutes to get right.

Experts question whether hands-free texting opens the door to all sorts of smartphone activities for drivers, particularly in new cars that market their connectivity.

"A main question is: If you make texting and Facebook-updating and tweeting a hands-free operation, do you encourage more of it?" said Russ Rader, a spokesman for the Insurance Institute for Highway Safety. "Then you're potentially increasing the amount of time that people are distracted."

HOW HANDS-FREE TEXTING WORKS WHILE DRIVING

1. Before getting into the car, sync your phone to some other device - like a Bluetooth earpiece or, if you have a new car, an app on your steering wheel or dashboard.

2. When driving, turn on your earpiece or the part of your car that's connected to your phone.

3. Say "text" and then the name of person you want to text, then speak out the message and say "send."

4. When receiving text messages, your earpiece or car speaker should speak the text to you.