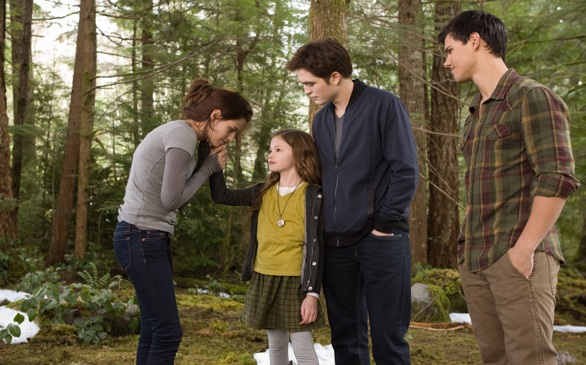 The Twilight Saga: Breaking Dawn - Part 2 is the fifth and final film in the wildly successful Twilight movie series. Campus Circle was at Comic-Con this weekend to participate in a Q&A with the stars of the film, Kristen Stewart, Robert Pattinson, and Taylor Lautner, as well as Stephenie Meyer, the author of the Twilight novels.

Q: Would you consider this a bittersweet ending, seeing as this is the last film?
Kristen Stewart: Yeah, it’s funny...because I do really enjoy living in this world, and we got to do it for four years. I put everything I have into [this], and I can say the same for these guys [Robert Pattinson and Taylor Lautner]. It’s something I’ll always have. (To Stephenie Meyer) Somebody said you wanted to apologize to me? That is ridiculous. I’m so thankful.

Stephenie Meyer: Well, the question was about your lives changing, and I imagine on a day-to-day basis it’s a lot more annoying than positive.

Q: How has working on these films changed you personally?
KS: I think it just affirmed why I like to do what I do. As a person, I could not begin to answer that question –it’s so loaded.

Q: What were your first impressions of each other when you met all those years ago?
SM: For me, the first time that I saw them was pretty memorable because they were coming straight from a shoot in costume. So the first time I met them, they were all dressed up as my imaginary friends. It was one of the most bizarre experiences of my life.

KS: (points to Robert Pattinson) I liked his pants. Taylor... It’s so strange because you were a kid when I met you, and after New Moon, you weren’t a kid anymore. I can’t define it, but sometimes you meet people in life and you’re like, “We should make stuff together. We will do good. Let’s utilize whatever this energy is.”

Q: What was the one new thing that you discovered about each other on this film?
SM: Something new after that long together? Well, the one new thing for me was seeing the new Bella. That was really big. Everybody else is just the same. (laughs)

Taylor Lautner: I’ll talk about that for a second. Kristen has done such a great job during this whole franchise. She’s always been this perfect, awkward, clumsy... And all of the sudden, she’s now just transformed herself into a sleek, sexy vampire.

Q: Robert, are there any similarities between you and Edward Cullen?
Robert Pattinson: After the first meeting with you [Stephenie Meyer] about Edward...

SM: He sat there and argued with me about what Edward thinks and feels.

RP: But after three movies, it’s hard to see where you end and where your character begins.

Q: If there were to be another Twilight book, what would it be about?
SM: Well, Bella’s story is definitely told.  Back in the day, when I was never going to stop writing about vampires, there was a reason that they [Edward and Bella] had a child.

RP: What if Edward and Bella got divorced, and it was a kind of Mr. and Mrs. Smith thing?

Q: Robert, the first time you came to Comic-Con, you seemed almost visibly shaken by the experience. Compare the experience of Comic-Con then to Comic-Con now.
RP: I don’t think anyone has ever experienced a crowd that large. It’s strange; it’s inspiring. With Comic-Con, there’s actually a bit of back-and-forth, unlike a premiere, where you’re walking around in a haze of people.

Q: After doing these films, do you have a better insight on why Twilight has become such a phenomenon?
SM: For me, no. It still surprises me all the time.

TL: That’s because you’re just being really humble about it. All the credit does go back to the books and the characters. We’re extremely honored to be able to bring those to life. I mean, the books are what these fans fell in love with.

KS: I have been obsessed with this thing, and it’s been such a personal experience.

Q: You’ve all started doing other projects, but you might still have the label “that actor/actress from Twilight.” Is that a label you wish you didn’t have, or one you wear with pride? Did it help you with other projects?
KS: Yeah, suddenly, the access we all have is ridiculous. It’s a huge compliment –especially from fans of the book. If they call me “the Twilight girl,” that is the biggest compliment. I mean, please pigeonhole me! That means I did it right. Now I’m allowed to challenge myself the way I want to, rather than falling into things.

Q: There is a lot of hype among the fans about the vampire sex scenes. Are we going to get some?
KS: Well, we were supposed to have mind-boggling, other-worldly sex in Breaking Dawn - Part 1, and we really... (sigh) this is weird (laughs) …we really went with sweet. It was really just about discovery. Nothing about this series is raunchy, and I...