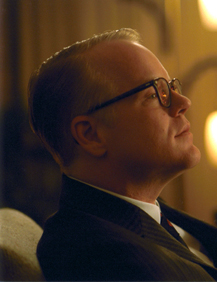 "Ever since I was a child, folks have thought they had me pegged, and they’re always wrong," says the title character of Capote. Well, the movie seems to think it has him pegged, and I’m pretty sure it’s wrong, too.

Not exactly a biography of Truman Capote, Capote focuses narrowly on the years during which he wrote In Cold Blood. His two key relationships are with Perry Smith, one of the murderers he profiled, and Harper Lee, the childhood friend who would go on to publish To Kill a Mockingbird (the character of Dill is based on Capote) and who helped with his research. In both cases, the movie’s view is that self-centered Capote used and lied to these people until he was done with them, and then he spit them out.

Capote is beautifully made, but it regards Capote as a monster, and that’s not a helpful point of view for a movie that is trying to understand someone. Early on, Capote is given a few comic moments, but it becomes clear that writer Dan Futterman and director Bennett Miller are more interested in indicting Capote than exploring him.

In Cold Blood’s success left the writer empty and embittered, which Miller wants to trace back to his treacherous treatment of Lee and, especially, Smith. Maybe so, but the movie tries to have it both ways – arguing that Capote didn’t care about Smith and used him and that he loved Smith and abandoned him. Well, which is it?

In the title role, the gifted Philip Seymour Hoffman seems too interested in judging Capote to play him accurately. He gets the distinctive voice and mannerisms right, but when Capote sits back to observe, we’re conscious that it’s Hoffman pulling the Capote strings. It’s a technically accomplished performance but not a wholly lived one. I’d compare it to listening to a stereo with one earphone in, instead of two: The sound is there, but the soul is missing.

There are other, minor lapses – at the 1962 premiere of the Mockingbird movie, Capote says he has been working on the book for four years, which is impossible, since the murders were committed in late 1959. But, ironically, the movie’s key flaw is that it lacks the empathy Capote himself employed in writing In Cold Blood.

Like its subject, Capote devotes itself to exposing horrifying behavior, but, unlike him, it doesn’t care where the behavior came from.
Article posted on 10/24/2005
This article has been viewed 1365 times.