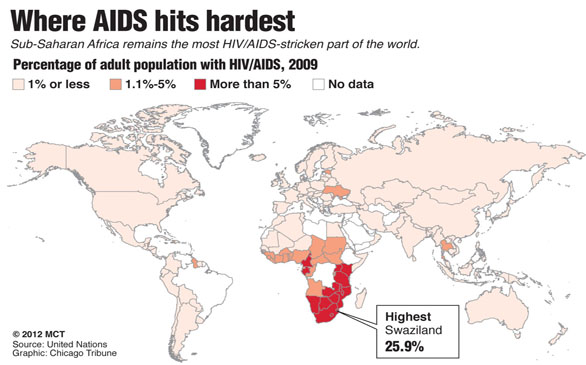 Map of the world showing percentage of adult population with HIV/AIDS in 2009.
(Credit: Chicago Tribune (MCT))

The Food and Drug Administration approved a drug Monday that could significantly reduce the risk of contracting HIV, the virus that causes AIDS, among high-risk groups.

Truvada, a blue pill taken once a day, was shown in clinical studies to slash transmission of the virus by up to 75 percent.

"This is a big step," said Marjorie Hill, chief executive of the AIDS group Gay Men's Health Crisis. "If people are looking for the magic bullet, the cure-all, we don't have it yet. What we do have is an increasingly growing tool kit."

Many HIV and AIDS researchers and activists say Truvada is a promising way to reduce new infections, which have remained stubbornly high for years.

"It's going to save lives," Hill said.

Some  worry that the drug will have the opposite effect by encouraging unprotected sex.

"Today marks a catastrophe in the fight against HIV in America," Michael Weinstein, president of the AIDS Healthcare Foundation in Los Angeles, said in a conference call. "If you look back five years from today, you will see this decision by the FDA will cause there to be more infections, not less."

Truvada, made by the Foster City, Calif., pharmaceutical firm Gilead Sciences, was  approved in 2004 to help treat people infected with the human immunodeficiency virus. In those who are not infected, it can prevent the virus from getting a foothold in the body.

The FDA will require that patients have HIV tests before getting a prescription to ensure they are not already infected. If they are, the virus could develop resistance to Truvada, which is combined with another drug to treat those already infected.

The annual rate of new HIV infections in the U.S. has remained around 50,000 since at least 2004, and rates have risen among young, gay black men. The Obama administration pledged to cut the number of new infections 25 percent by 2015, but existing methods of prevention - essentially condoms and abstinence - have not budged the number.

The FDA has been searching for alternatives. Debra Birnkrant, director of the agency's Division of Antiviral Products, said Monday's approval would spur progress toward the administration's goal.

"The hope is over time it will reduce the rate of new infections or incidence in the United States," she said.

Treating HIV has been shown to reduce a patient's likelihood of transmitting the disease. But offering new ways for HIV-negative people to protect themselves is important because a disproportionate number of infections are caused by people who have not been tested and are unaware they are infected.

"If you're an HIV-negative person, you sure can't rely on the fact that your partner is being treated," said Joel Gallant, vice chairman of the HIV Medicine Association. and an HIV/AIDS doctor in Baltimore.

The pill's cost could be a problem, however. A year's supply costs $13,900, according to the manufacturer. Financial aid is available for HIV-positive patients, but not for those testing negative.

"The problem is that people at the greatest risk are not only uninsured but not connected with the health-care system," Gallant said.

The FDA's Birnkrant said the studies offered no evidence that people using Truvada stopped using condoms. But opponents worried that the drug's approval will lead to riskier behavior outside the confines of a clinical study.

Gallant said the issue could be a red herring, however, because many people at high risk have already stopped using condoms as the fear of AIDS has weakened.

"Condoms do detract somewhat from the pleasure of sex, and some people feel it's not worth it," he said.