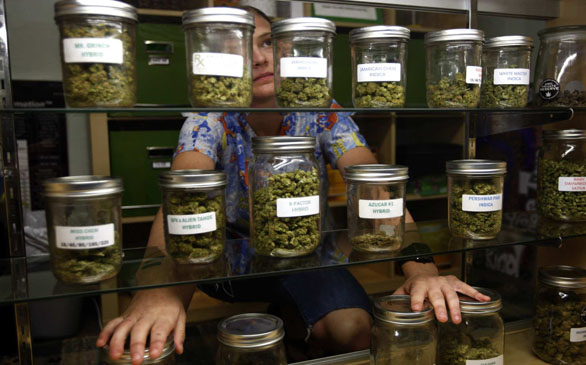 University of California medical researchers slipped an ingredient in chili peppers beneath the skin of marijuana smokers to see if pot could relieve acute pain. It could - at certain doses.

They monitored patients with AIDS and HIV as they toked on joints or placebos to determine whether marijuana could quell agonizing pain from nerve damage. It provided relief.

They tested a "Volcano Vaporizer" to see whether inhaling smokeless pot delivered healthier, low-tar cannabis. It did.

California's famed Center for Medicinal Cannabis Research - established by the Legislature to answer the question, "Does marijuana have therapeutic value?" - has now all but completed America's most comprehensive studies into the efficacy of pot.

The money is gone. State-commissioned clinical trials totaling more than 300 research subjects are over. The last data are being crunched for medical journals. And it is unlikely that medicinal pot research on such a scale is going to be repeated any time soon.

Headquartered at the University of California, San Diego, with work also conducted in Sacramento County and San Francisco, the Center for Medical Cannabis Research challenged medical orthodoxy by undertaking the first clinical trials in decades looking at pot as medicine.

Now it survives in name only - as an informational center and potential clearinghouse for grant applications for future cannabis studies.

Political frictions over pot remain volatile and researchers say getting additional studies approved by federal agencies is as hard as ever. Despite findings of potential health benefits by California researchers, cannabis is no closer to winning federal acceptance as medicine.

After seven completed trials between 2002 and 2012, with five studies published and two pending, California researchers say the research shows pot does, in fact, have therapeutic value.

"Every one of the studies showed a benefit," said Dr. Igor Grant, a neuropsychiatrist who served as director of the Center for Medicinal Cannabis Research. "The convergence of evidence makes me convinced there is a medical benefit here and there may be a niche for cannabis."

The California researchers sought to avoid the politics of pot or advocacy of its use. But Grant said the research results suggest the U.S. government's listing of marijuana as a Schedule I drug with no medical use - on par with heroin and LSD - "is completely at odds with the existing science."

"It is intellectually dishonest to say it has no value whatsoever, because it's just not true," he said.

While doctors can recommend marijuana, and people buy it at California dispensaries, it is not available as a legal prescription drug.

So the challenge for California researchers was to try to determine if a plant with no uniform medical dose could be shown as effective.

In many cases, researchers took their cues from people already using marijuana.

Dr. Donald Abrams at UC San Francisco and Dr. Ronald Ellis at UC San Diego knew AIDS and HIV patients with nerve damage were treating themselves with cannabis to quell shooting pains from stimuli as benign as pulling a bed sheet over their toes.

In separate clinical trials between 2002 and 2006, Abrams and Ellis found that patients infected with HIV got marked pain relief from pot - even on top of prescription pain medications.

In May, a published study by Jody Corey-Bloom, director of the Multiple Sclerosis Center at UC San Diego, reported that 30 patients smoking marijuana got noticeable relief from painful spasticity.

Through May, another research team led by UC Davis pain management physician Dr. Barth Wilsey worked to determine whether cannabis could relieve pain without getting people stoned.

Wilsey was surprised when research subjects with discomfort from nervous system damage found the same relief from marijuana cigarettes with 3.5 percent tetrahydrocannabinol - the psychoactive ingredient in pot - as from cigarettes with 7 percent THC. He commissioned a follow-up, in which patients breathed in vaporized pot with even smaller amounts of THC or with pyschoactive elements extracted.

"I think we're traveling together," Wilsey said of the synergy between researchers and subjects using cannabis. "I want to be able to provide a suitable dose that doesn't impair people or impairs them minimally."