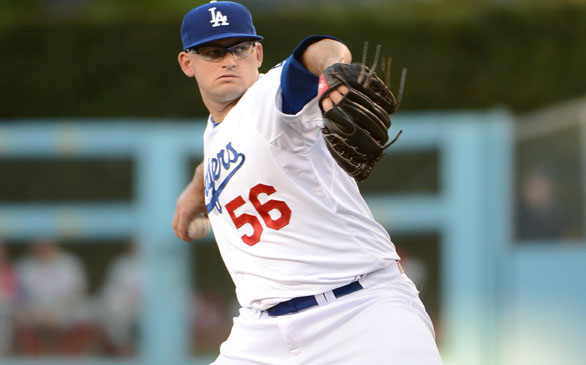 Replacing right hander Chad Billingsley due to injury, pitching prospect Stephen Fife unexpectedly took the mound Tuesday night against the visiting Philadelphia Phillies. Fife, by all means, did his job. The Dodger bullpen and offense did not, however, in the team's 3-2 loss.

"We're still not getting [enough] from the standpoint of putting up enough runs," Dodger manager Don Mattingly said after the game. "You can say the bullpen didn't save the game, but saves can be a three-run lead. They can't all be one run."

While Billingsley was placed on the 15-day disabled list, Fife was called up earlier in the day from Triple-A Albuquerque. He produced a solid six innings of work, allowing one earned run on four hits, three walks and one strike out.

"It's a dream come true to finally get a chance to pitch in the big leagues, and I had a lot of fun out there," the 25-year-old pitcher told the press.  "I definitely had a rush of emotions stepping out there on the top step before the first inning...I got it over with; the first one is out of the way."

Fife's only surrendered run came in the first inning after Jimmy Rollins plated home on a Chase Utley groundout. Rollins had doubled earlier and reached third base when Shane Victorino made a sacrifice bunt.

Perhaps it was jitters, but Fife settled down after that. What is more important, though, is that Fife gave the Dodgers a chance to win the contest. Los Angeles was up 2-1 when he exited. Relief pitcher Josh Lindblom pitched a scoreless seventh inning, but both relievers Ronald Belisario and Kenley Jansen could not seal the deal.

For the Dodgers, Belisario has been an All-Star caliber tosser during this campaign, but he relinquished a walk and hit two batters to load the bases.

"I don't know what happened after I got two outs. I just try to throw strikes. It happens," Belasario said to reporters.

That prompted manager Don Mattingly to make a change with two outs. Jansen came in, and Phillies' Hunter Pence collected a single down the middle, scoring John Mayberry and Utley. That was all Philadelphia would need to earn their second straight victory over the Dodgers, who are struggling to capture wins after owning MLB's best record for the season's first three months.

"We kind of overachieved to a point," Mattingly said. "But I'm not going to panic all of a sudden and change things around. We'll make improvements and keep going."