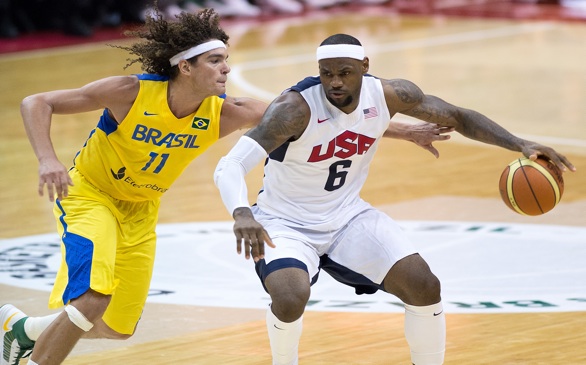 With the London 2012 Summer Olympics only several weeks away, the United States men’s basketball team has finally come together. With injuries to several key players, including Dwayne Wade, Chris Bosh and Dwight Howard, the complete roster wasn’t even finalized until recently on July 7. Hall of Famer Mike Kryzewski once again serves as the team’s head coach, with former NBA coaches Mike D’Antoni and Nate McMillan serving as assistants. The guard position features stars Kobe Bryant, Chris Paul, Deron Williams and Russell Westbrook in the mix. James Harden and Andre Iguodala figure to play both guard and forward. The world’s two best players, Lebron James and Kevin Durant, highlight the forward position, while Kevin Love, Carmelo Anthony and Anthony Davis will also step into the rotation. Finally, the team’s only true center will be anchored by reigning Defensive Player of the Year, Tyson Chandler.

As with every Olympic team, Coach K will have to be able to manage his team’s egos in order to be successful. With so many big names and strong personalities together on one team, there is always the possibility of problems arising. Each player is used to being a superstar in the NBA and having his team rally around his ability: He is the main option, he gets the most minutes, and he is the center of attention. With a team of 12 superstars, the most common issues that rise are due to disagreements in playing time or usage while on the floor. Coach K is plenty capable of handling this, but needs to constantly manage every ego appropriately. Team USA has to remember that it is playing as one for the country, rather than as individuals. Players will have to accept their roles and rally together as one in order to be able to win that gold medal. The people of the United States expect that from Team USA, and will not tolerate any sort of immaturity or distraction from the ultimate goal.

Coach K’s team bears the huge responsibility of representing the United States, and should they lose, the entire country’s image will take a hit. The expectations are high –and rightfully so. While each American may not demand a blowout every game, it goes without saying that every person in the United States expects a gold medal.

With so many different types of players on the team, it is interesting to see what role each player is going to play. Olympic veterans Bryant and James will bring the scoring, team leadership, veteran savvy and defensive tenacity we are all used to seeing year in and year out. This is their team, and they will be the face of Team USA.

Paul will be the starting floor general, and will be much more of a facilitator rather than scorer. With so much offensive talent around him, Paul really can focus on creating open shots first and creating his own opportunities second. Anthony will most likely start due to his experience on the team, though Durant figures to get the bulk of the small forward minutes. Anthony is as explosive of a scorer as any, but Durant is just as unstoppable, and contributes far more in other categories such as rebounds and assists.

Chandler will constantly log big minutes as the only real center on the team. He’s expected to be a monster on the glass, contributing his defense, shot-blocking ability and rebounding. Westbrook and Williams will back up Paul interchangeably, with each one playing the shooting guard at times as well. Westbrook is the far more explosive of the two, and can bring the instant offense. Williams, however, is the much better defender, and his size will come in handy against bigger guards. Love will occasionally spell Chandler and play center, but will mostly play the power forward position. As such a versatile player, he will dominate the glass while also opening up the floor with his three-point shot. Love will be the biggest “x-factor” of Team USA’s success, considering his immense talents in multiple categories, including scoring, rebounding and three-pointers, among others.

Iguodala has the role of a defensive specialist, and the nod as the best perimeter defender on the team. He can even guard players bigger than him with success, as seen in these last playoffs. Finally, Harden and Davis are expected to play limited minutes, mostly to spell the other players when they need rest. Neither, especially Davis, stacks up to the talent level of the other superstars. Harden will come into most use against smaller guards, as his size and speed can create difficult matchups. Due to the lack of Team USA’s size, Davis will log most of his playing time against bigger frontcourts such as Spain.

Overall, Team USA is undoubtedly stocked with some of the best players in the entire world. The guard and forward positions have extremely deep rotations that utilize the strengths of each individual player. Coach K has the opportunity to make multiple personnel lineups that will create matchup nightmares for opposing teams. For example, a smaller lineup consisting of Paul, Westbrook, Durant, James and Love would run teams to the ground by means of fast-break points and transition baskets.

On the other side of the spectrum, a large lineup could include Williams, Harden, James, Love and Chandler. These five would play a whole different game focusing on a half court offense, rather than running and gunning the ball.

Whether it’s on offense or defense, Coach K has a multitude of lineups that he can create depending on the makeup of the opposing team. When comparing Team USA to the rest of the world, most people would agree that the United States is the clear best. Individually, its players are almost all superior in ability, athleticism and basketball knowledge. It’s about being able to successfully put this package together in a functioning manner; if it all comes around, Team USA will be unstoppable.

The only real issue for Team USA is the size of the frontcourt. With Chandler as the only true center, the depth behind him is clearly lacking. The next two tallest on the team are Davis and Love, who are both 6’ 10”. Both figure to be lining up primarily as power forwards with occasional spurts as center. At times, James will almost certainly be placed at the four as well. No one questions the physical and fearless nature of these players, but with that being said, raw size will still play a major factor in the frontcourt. Especially considering the uncertainty surrounding Davis’s transition into professional basketball, the size of the team could be in an even larger mess come the Olympics. Team USA will have to continually rely on its superior athleticism to not only overcome this problem, but also reach the height of its ability.

While Team USA seems a shoe-in to win the gold, if they are not careful, the gold medal could slip out of reach. A healthy team featuring Howard and Bosh would absolutely tear through the Olympics with little competition. Without that height however, the United States could be vulnerable in the frontcourt especially against Spain. While Argentina is worth mentioning, Spain is the United States' only real worry. With a front court featuring 7-footers Marc and Pau Gasol, as well as last season’s shot blocking leader Serge Ibaka, Spain features a massive presence down low. How Team USA fares against this remains to be seen, but this could prove to be a larger hurdle than anyone ever imagined.

With the recent game against Brazil fresh on our minds, it is clear Team USA has a long way to go before reaching Dream Team status. Those comparisons are a mere afterthought after an uninspiring 80-69 win against the far less talented Brazil. Featuring a frontcourt of NBA talent in Tiago Splitter, Anderson Varejao and Nene, Brazil dominated the glass and capitalized on Team USA’s clear weaknesses. The most concerning statistic was Chandler’s one rebound; if he can’t contribute on boards, then Team USA is in big trouble. Why the next two tallest players in Love and Davis played a combined six minutes is inexplicable. If Coach K thinks a smaller lineup is going to always cut it, then he is going to be in for a rude awakening.

There is still time to figure out what needs to be done in order for Team USA to reach its potential; however, with each day the Olympics comes closer, and so does the inevitable matchup against Spain that will determine who goes home with the gold.