The Twitters and Tumblrs You Should Be Following Now 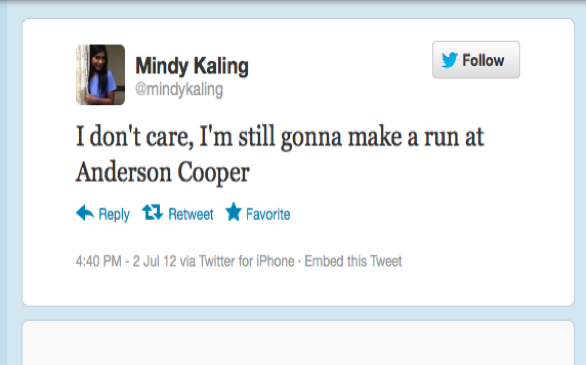 Mindy Kaling
@mindykaling
You may recognize Mindy Kaling from her role as scene-stealer Kelly on “The Office,” and she’ll appear on your small screens this fall with the highly anticipated “The Mindy Project.” However, her resume also includes the title Culturally Aware and Super Witty Tweeter. Her past experience and abilities that have earned her this title include being a writer for “The Office,” penning a hilarious book (Is Everyone Hanging Out Without Me?) and watching “Breaking Bad” religiously. As a bonus, she spars with BJ Novak occasionally and it’s the best.

Tim Siedell
@badbanana
It was very difficult to go through his page and try to find an exemplary one to showcase because I actually “LOL” when I read them, and no one really likes to explain why they’re cackling at their computer screen. His tweets have appeared in a book, been performed onstage, printed on shirts, read on television and posted online at the Washington Post and New York Times. How am I supposed to pick? So I closed my eyes and pointed at my computer screen.

Sample tweet: I find the best way to avoid having to talk to other people on the bus is to drive my own car.

Weird News
@weirdnews
This twitter will give you short one-liners about and links to, you guessed it: weird news. Apparently, they’re based out of Japan, so you know they’re on the up-and-up and have a good handle on what’s weird and what’s not. By the way, it looks like most of the weirdest news comes from Americans, so I don’t know what that says about us.

Homer Simpson
@HomerJSimpson
Twitter is chock-full of role-players. There are many fictional characters (Lord Voldemort, the Joker, Barney Stinson) tweeting amongst us today. While there were many great accounts to pick from (my second favorite being Drunk Hulk), America’s favorite family man Homer Simpson couldn’t be overlooked (not intended as a jab at his weight). Plus, this account is verified, so you know he’s the real deal.

Sample tweet: So, Miami’s the champs. See other teams? All you need to win are three giant superstars. How hard is that?

Campus Circle
@campuscircle
This goes without saying! Still, I’ll say it. Follow our Twitter so you can keep up with the newest articles that hit our site.

Stumble across these Tumblrs…

ilovecharts.tumblr.com
Who could have guessed a tumblr full of charts could be so awesome? Some are seriously detailed, some are funny, some are informative and all are worth your time.

surisburnbook.tumblr.com
If Suri Cruise, daughter of Tom Cruise and Katie Holmes, is a judgmental, cold-hearted little toddler, no one would be surprised. (Sorry, but this little girl enjoys wearing heels and has a $635 dress in four different colors.) This tumblr puts captions under pictures of Hollywood progeny and their parents in the voice of the little girl, and the best part about it is that all of it sounds like something Suri would say. It’s believable that she has it out for Shiloh Jolie-Pitt and is deeply disappointed by the way Willow Smith carries herself. Don’t think the parents escape ridicule, either. One of her latest posts belittles Seal’s choice of shoes.

justlittlethings.net
If you’re ever having a bad day, this tumblr is the cure. They’re just simple one-line texts that list “life’s simple pleasures that are commonly overlooked.” You’ll smile just reading through a page and thinking about those small things that make life great, some you may have forgotten about in all the chaos.

dearphotograph.com
This tumblr’s concept is a little difficult to explain. It’s people taking pictures of treasured locations in their lives, and holding up an old photograph of that same location. They match up the real-life place with the details in the picture, aligning the doorposts and the shrubs to create nostalgia. Captions are added in a “Dear Photograph,” reminiscing format. Look, just go on the site.