"As You Like It": Now-July 29 @ VA West Los Angeles Healthcare Center Campus 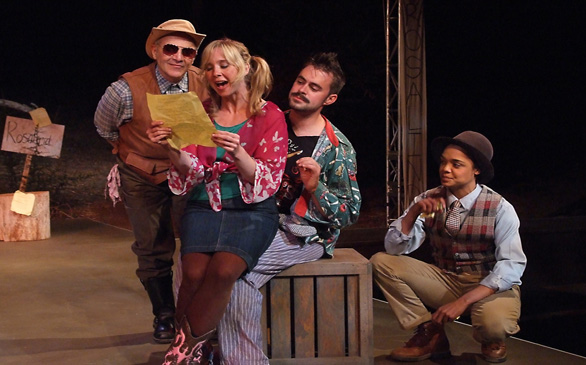 Shakespeare's plays are a seemingly eternal mainstay at the theater, with his works being re-performed and re-imagined for hundres of years. One of the latest interpretations to hit the stage is the modern, hip production of "As You Like It," presented by Shakespeare Center of Los Angeles' artistic director Ben Donenberg and the VA Greater Los Angeles Healthcare System --and it is simply superb.

The piece, which acclaimed actor Tom Hanks attended Wednesday night (July 18th) along with his beautiful wife Rita Wilson at The Japanese Garden in Westwood, is a fine example of William Shakespeare's writing abilities. But this is no old-school version of the play.

Donenberg's artistic direction is easily commendable, as well as the overall direction from Kenn Sabberton in this new version of the classic romantic comedy. Tessa Thompson, as Rosalind, leads a talented cast, who provided quite the mid-summer's night entertainment. (Heck, Hanks was filled with laughter five minutes in.)

A 28-year-old native of Los Angeles, who exhibits both charm and beauty, Thompson delivered an impeccable performance right from the start. The audience genuinely fell in love with her and the role she portrayed.

"As You Like It" truly pays tribute to not only Shakespeare, but the venue it is set in as well. The Japanese Garden is known as one of the loveliest outdoor venues on the West Side, particularly during this time of year, and the setting really aided in the romanticism of the play.

In addition, the performance features fine singing and live music, as the characters set right to the Forest of Arden. Everyone gathers here to sing, dance and fall in love. Interestingly enough, they go on to discuss what is truly important for their own health and the health of mankind.

“In Shakespeare, as in life, there is a restorative power of nature and in art; creating music, dance and song [has] a healing force,” Sabberton says in a prepared statement.  “It is the transformative Shakespearean experience that an audience can enjoy – as audiences have for hundreds of years – under the moon and the stars.”

"As You Like It" has a limited engagement, playing now through July 29 at The Japanese Garden on the grounds of the VA West Los Angeles Healthcare Center Campus. Tickets start at $25. For more information, click here.