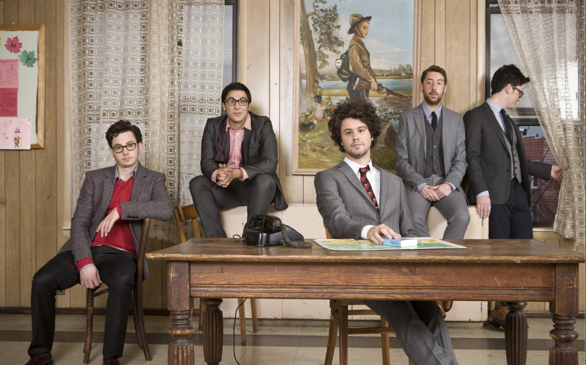 Gossamer brings the electro-pop you expect, along with a few surprises.
(Credit: Sony Music Entertainment)

Musical quintet Passion Pit has returned with Gossamer, an album that manages to present little surprises at every turn while holding onto a distinctly Pit sound.

The very first track pulls the listener in; on the surface it’s a happy-go-lucky tune but on closer inspection, it’s a track that delves into life’s grittier issues. With the right choice of words and phrases, the mood in “Take a Walk” shifts as Michael Angelekos sings “'watch my little children / play some board game in the kitchen / and I sit and pray they never feel my strife.”

The rest of the tracks reflect some sort of life discomfort or another, among them plenty of songs about love gone wrong, with tinny noises, upbeat rhythms and Angelekos’s fun, welcoming voice. Tracks like “Hideaway” and “Carried Away” show the band’s love of experimenting with sound.

A few tracks pop out from the rest, saving Gossamer from becoming too predictable. “Constant Conversations” deliciously slows down the tempo and brings it quite a different sound from the other tracks. The distinct Passion Pit sound comes in the chorus, which is essentially a string of "OHs." “Cry Like a Ghost” carries an equally crisp beat and pairs it with funky synth noises that sound like their own little packages of emotion. A deep, electro-heavy sequence of bass notes paired with a distorted voice in the pre-chorus make the track mysterious yet danceable. The same tinge of melancholy pervades the track, but the rhythm feels natural, and the unique sounds come easily.

However on the down side, some tracks might sound forgettable because they are so bubbly. The ones that shine the most take a few extra risks that lead to tracks that go beyond the band’s branded electropop sound. Despite the somewhat predictable nature of some of the songs, Angelekos’s voice wins you over track after track, and the album itself, for the most part, gets you bouncing along note after note.