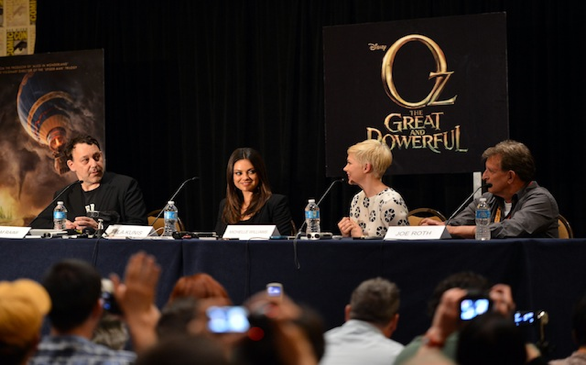 One of the most anticipated projects coming up from Disney is Oz: The Great and Powerful, which will tell audiences the origin story of the man behind the curtain. Campus Circle got to sit down for a Q&A interview session at Comic-Con with director Sam Raimi (Spider-Man trilogy, Evil Dead trilogy), producer Joe Roth (Alice in Wonderland), and stars Michelle Williams and Mila Kunis.

Q: Mr. Raimi, you showed with your Spider-Man movies that you have a great way of being able to stay true to the source material, while having the Sam Raimi touch that we love, whether it’s the camera work or the sense of humor you project onto it. How did you go about maintaining that balance for Oz: The Great and Powerful?
Sam Raimi: As opposed to the camera just doing a lot of gymnastics for thrills and chills' sake, we’re really trying to describe the fantastic world of Oz: show the depth and height of the waterfall, what it’s like to soar with Glinda above her beautiful environments. The camera is used to describe the beauty and the fantastic qualities of this impossible place. The sense of humor comes from the whimsical nature of [author L. Frank] Baum’s great world and from the characters. You have the main character played by James Franco, who is a bit selfish as the story begins, and as he runs up against those he admires, primarily Glinda, his shortcoming are often the stress of the humor.

Q: Oz is quite different than other films you’ve worked on. What was your approach for this project?
SR: This is a straight-forward family picture. I would say it’s a great, classically Disney type of movie, and it really is all about these characters and their interactions with each other, the friendships they make, how some characters are sinners, how they hurt others, how those sins can grow. It’s about finally recognizing the things you do in this world have consequences, and how to be the best person you can be. It’s about recognizing the mistakes we’ve made and moving on past them, and growing up into something better than what you were starting out. That’s the most exciting type of stories for me: the ones with character growth. I so loved the screenplay. I was so moved by the goal of telling an uplifting story, and what’s uplifting about it is that the character [Oscar] learns to be a better person. Like a great challenge, I wanted to see the movie, and more than anything I think that’s what gives you the strength to direct a movie: if you want to see it and you understand the characters. I didn’t understand them all completely; it’s a learning process with the actors on set. But nevertheless, when you read the script, you think you have an understanding of them –then you learn how to direct them.

Q: To Michelle and Mila, what’s it like working with the cinematic genius Sam Raimi? And Sam, what’s it like working with two of the most beautiful women in the world?
SR: It’s great to work with them because they’re great actresses. They both have complex roles and complex interactions with the other characters in this piece, and they just do a beautiful job performing them. It’s very funny and realistic. They’re a pleasure to watch.

Mila Kunis: Sam is fantastic. I don’t know where to begin. I would do craft service for Sam if he asked me to. He is probably one of the funniest, sweetest, most gentle human beings that I’ve ever had the pleasure of working with. Aside from being incredibly talented, he is so sincere about the projects that he chooses and the people that he casts, and he’s so supportive of everybody around him. He is incredibly inspiring to work with. You go to work and you want to make him happy. I think that having that everyday – a 17-hour day – is the greatest gift you can give to everybody.

Michelle Williams: I’ve never made such a big movie before, and I didn’t know what it was going to be like. I didn’t know if the things that interested me and the things that concerned me, if Sam would have time for, patience for. Not only did he have time and patience, but at the beginning, rehearsing, on the 17th hour of the sixth day, I found that [support from] him [as] a collaborator, a friend, a confidant and a partner in everything. For me, it was a very holistic experience; it was a real melding of my work-life and my personal-life, my film family and my real family.

Q: Who is Bruce Campbell playing in this movie, and will the great Ted Raimi also be appearing in this movie?
SR: My little brother Ted plays a tiny part, otherwise my mother would have my head. And Bruce Campbell unfortunately is in the movie. He plays a bit part, a tiny little cameo. He’s fun to watch in the picture. He did a great job. I can’t say where though, you have to see the picture.

Q: Will there be flying monkeys?
SR: The wicked witch has an army of flying baboons. She has and commands them to rule over all of Oz, and there is also a flying monkey in the story –different than the baboons, a nice flying monkey.

Q: Michelle, is this the first movie your daughter will get to see you act in?
MW: She’s seen one other movie that I’ve made. She’s one of the only people that saw Meek’s Cutoff and she sat through it. But this is definitely the one that she is most excited about that I’ve ever been involved in.