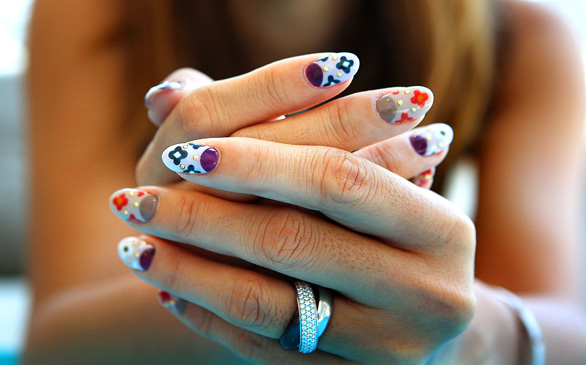 No longer relegated to the subculture sidelines or the subject of mockery, nail art has become an everyday indulgence, and not just for flamboyant pop stars like Nicki Minaj and Lady Gaga. It's been sported by Britain's Princess Eugenie, worn to the White House Correspondents' Association Dinner and shown up at the Golden Globe Awards.

"Nail art has been around for years, but in kitschy ways, like a Santa Claus or a Christmas tree on your pinky nail," says Suzi Weiss-Fischmann, creative director of OPI. "But in the last five years, the emphasis on nail design has been huge. ... Nails are an accessory."

Nail art is part of a larger trend of individualized self-expression that includes tattooing, body piercing and wild, temporary hair color - all of which is being driven in no small part by our cultural compulsion to share-and-compare on YouTube, blogs and social media.

Welcome to the era of what might be called Kustom Beauty, doing for the individual what the Southern California Kustom Kulture movement did for jazzy hot rods.

"Nail art has almost crept into the mainstream a couple of times," says Linda Wells, editor in chief of Allure magazine. "The closest call came when hip-hop artists Mary J. Blige and Missy Elliott were doing nail art with crazy designs like dollar bills and designer logos in the late 1990s and early 2000s. But then it disappeared."

Now it's not only back, it's booming. As of June 10, consumer spending on nail products and accessories at the mass-market level had increased 23 percent over the previous year to more than $1 billion, according to Symphony IRI Group, a Chicago-based market research firm. And the number of nail salons nationwide doubled between 1997 and 2007.

The boom is due in part to nail technology advances. "People can do this at home," Wells says. "It doesn't require going to the salon for four hours. Maybe you can't do Katy Perry's 3-D flowers at home, but you can do other things. Sally Hanson has stick-ons that look good because they are not stickers, they are made of nail lacquer, and they are flexible."

OPI recently released its first nail decals. Called OPI Pure Lacquer Nail Apps, they come in 14 designs, including rattlesnake, lace and fishnet prints, for $11.95 per package. Each kit contains 16 pre-cut appliques, which require only trimming once they are stuck on the nails.

Gel-color manicures, which are baked on using UV light and last two to three times longer than a regular manicure, allow for long-lasting decoration, including gradated glitter and stripes, as well as crystal and charm appliques.

The fashion world has embraced - and stoked - the nail art trend. Polish and cosmetics brands partner with fashion designers to create new colors and patterns that are presented during the fashion labels' runway shows in global style capitals such as Milan, Italy; Paris; and New York. At New York Fashion Week in February, for instance, MAC cosmetics created custom velvet-flocked nail tips for the Ruffian presentation. For the Kate Spade show, nail pro Deborah Lippmann designed polka dot nail art. And, front-row regular, blogger and model Alexa Chung wowed the fashion crowd with the Egyptian-style hieroglyphic eyeballs painted on her nails. YouTube how-to videos instantly sprang up teaching people how to get the look.

"Years ago, you never used to see nail polish on the runways," Weiss-Fischmann says. "And now, designers like Marc Jacobs and Jason Wu want nail designs to match certain looks, like painting the nail moon a different color or stripes, two toning or gradation."

Celebrities have also been influential in popularizing nail art. Peacockish pop singers like Minaj and Lady Gaga seem to be out to see who can sport the most outrageous manicures. For the "Born This Way" video, Japanese-born, New York-based nail artist Aya Fukuda filed Gaga's talons to sharp points, polished them blood red and decorated them with Gothic-looking jet black Swarovski crystals and silver hardware.

But the trend isn't just for teen fangirls. "I'm surprised at how women in their 30s and 40s are doing this," Wells says. "It's a playful thing and the beauty of it is that it can be taken off tomorrow. It's something you really can do for an evening."

A lot of the recent creative inspiration has come from Japan, where there are numerous nail art magazines and competitions.

"It's 3-D things and bar codes, gold glitter on the tips, nothing is off-limits," says Wells, who has yet to jump on the nail art bandwagon, being a pale pink Essie Mademoiselle woman herself. "The fascination with highly decorative things, with miniaturization of detail - that has finally come here.