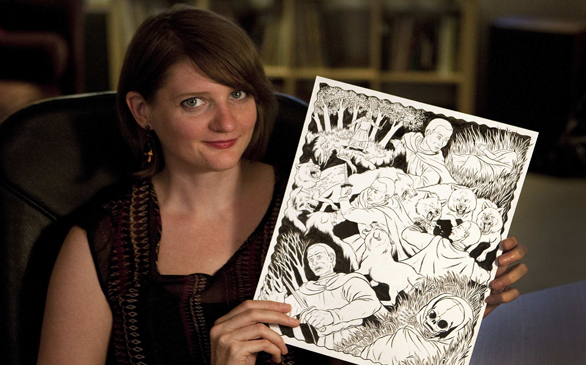 Selina Kyle's lacy red bra and its ample, curvy contents fill the first panel of Catwoman No. 1, published last year when DC Comics relaunched 52 of its most popular titles. By the last page, she's straddling Batman and spilling out of her leather suit once more.

Catwoman wasn't DC's only female superhero to make her New 52 debut in lingerie. In Red Hood and the Outlaws No. 1, extraterrestrial princess Starfire strikes a Playboy-like pose, bursting out of her purple bikini as she propositions Red Hood. And Voodoo, a shape-shifting half-alien hybrid, spends half of her first issue stripping.

But a broader look at the world of comics and the women who work there reveals the industry is far more gender-balanced than the superhero fare suggests. Though women still make up a minority of creative talent at Marvel and DC, their influence is growing. And in comics at large, women are on even footing and gaining ground.

"Outside the world of Marvel and DC, women are just doing it, and it's awesome," said Heidi MacDonald, a comics journalist and former editor for Disney and DC Comics. "They're succeeding or failing on the content of their work."

Women dominate the pages of manga (comics created in Japan), their graphic novels fill the catalogs of small independent publishers, and their Web comics draw millions of eyeballs.

Sarah Oleksyk, whose first graphic novel, Ivy, earned her two prestigious Eisner Award nominations, self-published her book in installments before independent publisher Oni Press picked it up. Eisner winner Vera Brosgol's graphic novel Anya's Ghost was published by First Second. Both novels are coming-of-age stories - Ivy is a teenager who runs away from home and Anya a Russian immigrant who struggles to fit in at her high school.

"Teenage boys aren't the only people with money, and unfortunately I think the mainstream comics juggernaut has just been focusing on this little section of readership for a long time," Oleksyk said. "There's this gigantic range of stories being told in indie comics - biographies, nonfiction, every sort of thing. So if you don't want to read something about crime-fighting superheroes, you have 10,000 other subjects to choose, and most of those are independently published."

Young female comics creators are coming up through the Internet, unhindered by the tastemakers and gatekeepers that guarded comics 30 years ago.

Faith Erin Hicks, turned off by mainstream superhero comics, created a strip called The Adventures of Superhero Girl about an otherwise ordinary young woman who uses her super-strength to fight crime. The cartoon was printed in the free Halifax, Canada, newspaper the Coast, but it was online that Hicks amassed her devoted following.

Lora Innes began The Dreamer - about a girl whose dreams take her back to the American Revolution -as a Web comic, taking to MySpace to invite teeny-boppers and Revolutionary War enthusiast groups to read the comic online. Now, The Dreamer is published by IDW, and Innes continues to attract readers who otherwise might not have set foot in a comics shop.

Industry veterans welcome the influx of female talent and are happy to bid farewell to the days of being grossly outnumbered by men at comic conventions.

"I look at my classes, and it's not uncommon that there are a few more women than men," said Jessica Abel, author of the graphic novel La Perdida. Abel has taught undergraduate cartooning courses at the School of Visual Arts in New York. "It's also not uncommon that they're the best students in class."

MacDonald, the Eisner-nominated comics journalist and editor of comics blog the Beat, points to the stark contrast between today's comics industry and that of the 1980s and '90s, when she helped start Friends of Lulu, a nonprofit promoting female readership and participation in comics. The group ceased operating last year.

"I think part of the reason why it faded away is that people were getting their own gigs," MacDonald said. "The reason for the organization kind of dried up. There was a lot more opportunity, and there wasn't so much need for it."

MacDonald points to the success of cartoonists such as MacArthur grant recipient Alison Bechdel, whose graphic memoir Fun Home was named the best book of 2006 by Time magazine, and Hark! A Vagrant author Kate Beaton, who started by publishing her cartoons online and now draws some of the longest book-signing lines at comic conventions.

MacDonald, Abel, Oleksyk and others are quick to point out that the frequently spotlighted superhero genre is just a tide pool in an ocean of work - a tide pool that has somehow managed to delay the sea change undergone by the rest of the industry.

Though she disagrees with the practice, MacDonald says she understands why the so-called Big Two cater so heavily to teenage boys and men.

"They're just terrified of getting the girl cooties on there and losing their audience," she said. "Marvel and DC, they have a different goal, a different corporate mandate. Certainly for Marvel, they are absolutely part of Disney's great master plan to have more boy readers. ... For DC, as part of the corporate structure, that is more where they fit in."

But even in the superhero world, new artists and more women are being brought in, partly in response to fan concerns.

"It's definitely been a push," said Bobbie Chase, editorial director for DC. "We're pursuing people all the time who could be new voices for comic books, but it's still going to be a predominantly male industry. I don't think that has to change, but we can certainly make a much better balance."