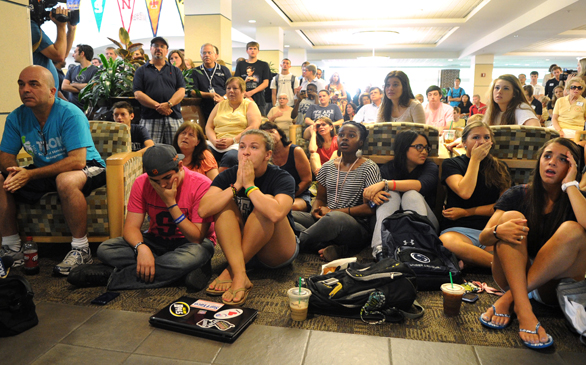 The NCAA also suspended the team from postseason bowl play for four years and ordered it to reduce 20 football scholarships over a four-year period.

Besides rewriting late head coach Joe Paterno's career history, the sanctions are likely to cripple a football program that grew into a regional powerhouse under his leadership. Because of the punishment, Paterno - who once held the record for the most wins in Division I college football with 409 career victories - saw his total drop to 298.

"Football will never again be placed ahead of educating, nurturing and protecting young people," NCAA President Mark Emmert said at a news conference in Indianapolis. "For the next several years, Penn State can focus on rebuilding its athletic culture, not on whether it's going to a bowl game."

Additionally, the NCAA said the university will submit to five years of athletic and academic monitoring from the NCAA and the Big 10 conference.

Emmert said that the university had been notified and signed a consent decree agreeing to the penalties imposed.

The Big Ten - the athletic conference of which Penn State is a member - announced its own set of sanctions Monday, including a provision that the university will be ineligible to share in the league's bowl money during the next four years.

That punishment is expected to cut $13 million from the university's budget, which will be donated to charities "dedicated to protecting children."

In a statement, Penn State President Rodney Erickson said, "It is important to know we are entering a new chapter at Penn State and making necessary changes.

"We must create a culture in which people are not afraid to speak up, management is not compartmentalized, all are expected to demonstrate the highest ethical standards, and the operating philosophy is open, collegial, and collaborative," he said.

Bill O'Brien, who replaced Paterno as head coach, called the sanctions harsh but added, "I will do everything in my power to not only comply, but help guide the university forward to become a national leader in ethics, compliance and operational excellence.

"I knew when I accepted the position that there would be tough times ahead. But I am committed for the long term to Penn State and our student athletes," he said.

"I was then and I remain convinced that our student athletes are the best in the country," O'Brien said. "I could not be more proud to lead this team and these courageous and humble young men into the upcoming 2012 season."

The NCAA relied primarily upon the findings of former FBI director Louis Freeh in justifying its penalties, said Ed Ray, chairman of the association's executive committee.

Penn State's board of trustees commissioned Freeh last year to study the university's response to allegations against Sandusky. He found in a report issued earlier this month that Paterno, Athletic Director Tim Curley, former university President Graham B. Spanier looked the other way for years for fear that bad publicity would hurt the football program, which brings in more than $50 million to the school a year.

Emmert said Monday the NCAA's executive committee based its unprecedented $60 million fine on the football program's annual revenue. The money will go to an endowment for non-university programs preventing child sexual abuse, he said.

Monday's sanctions were as surprising for their harshness as for the swiftness with which they came. In past scandals at the University of Southern California, Auburn and Ohio State, the NCAA attracted criticism for its slow pace.

"It's important to separate this from a traditional enforcement case," Emmert said. "This is action from the executive committee to correct what was seen as a horrifically egregious situation in intercollegiate athletics."

The sanctions announced Monday, though crippling, will allow Penn State's football program to continue and rebuilt. Only once in its history has the NCAA handed down its harshest punishment - the so-called "death penalty," which shuts down a university's football program for a season or more.

The association imposed that sanction on Southern Methodist University in Dallas in the late 1980s, after a scandal revealed university employees were involved in managing a slush fund that allowed donors to make prohibited payments to players.

Although the college was forced out only one season, its board of trustees opted to sit out another. The program never again regained its regional prominence.

Emmert said that from the start, NCAA officials decided that the death penalty would not be enough to address the problems outlined by Freeh.

"We concluded that the sanctions needed to reflect our goals of driving cultural change as much as imposing punitive actions," he said. "Suspension of the football program would bring with it harm to many who had nothing to do with this case."

Emmert said 1998 was chosen as the first year for vacating Penn State's victories because that was the year the Freeh Report said Paterno and three other top administrators began a cover-up of allegations against Sandusky.