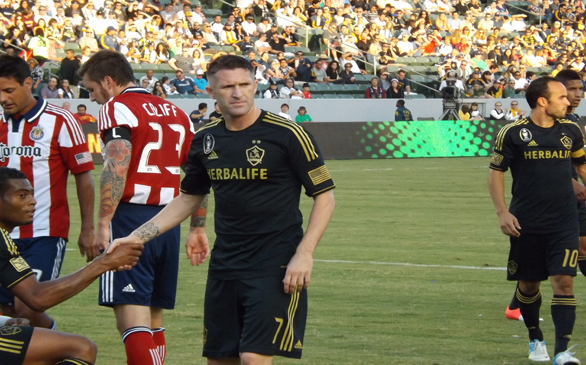 Robbie Keane (No. 7) scored his 9th goal of the year in the SuperClasico.

"It’s a good win for our team; I thought we played well from start to finish," Galaxy head coach Bruce Arena said during the postgame press conference. "It was a good team effort for the most part. We did a good job defensively, got a little sloppy in the second half, but the game opened up and I thought it fell in our favor."

With the win, the Galaxy improved to 9-10-3 with 30 points. Currently, they stand in fifth place of the Western Conference, which is good enough for a playoff spot despite a poor start to this season.

This triumph became the Galaxy's 15th all-time win in the SuperClasico matches during the MLS regular season. Ttheir city rivals, Chivas USA, dropped to 6-8-5, and their 23 points places them sixth in the standings.

Keane, who earlier in the season showed signs of greatness but just could not find the back of the net, penetrated Chivas USA's defense with a run from the top of the box. After a brilliant pass from Beckham, Keane gently trapped the ball before toe finger-kicking it passed goalkeeper Dan Kennedy for his ninth goal of 2012.

"He’s scoring," Arena said of Keane's recent goals. "He’s had a number of chances, [and] he’s putting his chances away. I think the partnership with Landon [Donovan] helps; there’s better coordination of the players."

Keane's goal gave the Galaxy a 1-0 lead in the 14th minute of the first half, and they remained ahead into halftime. Both Beckham (8th) and Brazilian midfielder Juninho (3rd) were credited with the assist.

Certainly, Keane believes the team has improved their play of late.

"The team is performing better," he said. "We’re playing better as a team, so it’s simple as that really. We have the same team we had last year when we were playing well, [but for] some reason or another, before the break we weren’t playing well as a team.”

Three minutes into the second half, Donovan scored his eighth goal of the year. Keane (5th) and Beckham (9th) received assists in Donovan's potent sprint that led to a solid shot through Kennedy. Donovan netted another in the 78th minute off a rebound inside the goalkeeper box after a Beckham corner kick from the right flank.

Former Galaxy member Paolo Cardozo scored at the 52nd mark to give Chivas USA hope, and cutting the Galaxy to 2-1, but it really was not enough to spark an offensive push. The Galaxy were simply too much this time around, particularly on the offensive end.

For the year, Donovan has recorded nine goals. Despite the win, he acknowledges the team could be playing even stronger.

“We’re playing well. With that, our guys that we depend on to make plays are making plays and, candidly, we’re probably leaving a few goals on the table each game,"  Donovan says. "So as good as we feel about this, we know we can still do better, and I think little by little defensively we’re getting better, so that’s a good combination right now."

After the team's friendly against Tottenham Hotspur Tuesday, the Los Angeles Galaxy next face FC Dallas in Texas on Saturday, July 28, at 5 p.m.

"We know we have a friendly next...but we also have our game against Dallas and the teams’ more focused on our season," Galaxy defender Sean Franklin explained. "It’s going to be tough going into Dallas and getting three points there."