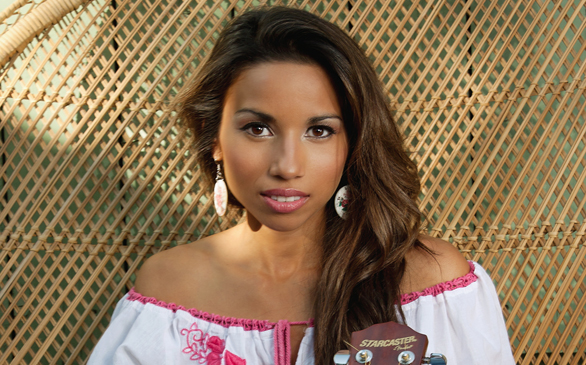 She has the voice, charisma, passion, concentration and desire, but what is really helping her achieve her dreams is the profoundly immense support from her family to pursue her goals.

This is Star de Azlan, a 26-year-old Latin singer and a native of Texas.

"It is a very unique and artistic name," she says of her stage name.

It is derived from her given name "Esther," which is Persian for "star," and she chose "Azlan" as her surname because it means Aztec land in Mexico.

"I am strong on my roots, and my dad is such a big philosopher," she says of her father, who came up with the idea to use the name Azlan.

She discovered the joy of singing at age 11, and has been embarking on her musical journey ever since then.

"I began writing poems in school," she says. "Then I began putting music to them, and I wanted to express them, so I began to sing them as well."

"It is a college town; not too big, not too small," she says. "I grew up by the river with my folks, whom I am really close to."

She was in the school's mariachi band, and they often performed at Cheatham Street, a local live music venue. One time when she performed, the head of Curb Records asked her to audition for the label; Mike Curb was pleased with what he heard, and decided to sign her.

Star de Azlan cites a variety of musical influences, from Selena to Spain's highly-regarded Rocío Dúrcal to Mariah Carey, who all played vital roles while growing up with her love of music.

"I would say Selena has been a huge influence on me throughout my career, and I think she is an influence on many Latinas aspiring to make it," she says, adding that Selena's singing, work ethic, dancing and stage presence have been a constant inspiration for her.

Her debut album, Like A Rose, is an American country music album, and her singles "She's Pretty" and "Like A Rose" are already climbing the charts: "She's Pretty" appeared at No. 52 on the U.S. Billboard Hot Country Songs chart.

Star de Azlan is a true performer and entertainer, who aims at satisfying her fans and the public. She sings in Spanish, Italian, English, French and Hebrew, in genres ranging from country to Latin music (banda, grupera, ranchera and tejana, among others).

"Julio Iglesias inspired me to do that," she says of her decision to sing in different languages. "That can open many doors, and you can relate better to the whole world."

Though she shines in country, Star de Azlan is exploring her musical love. She recently released her radio single "Si Quieres Verme Llorar" (If You Want to See Me Cry), a classic romantic melody from nearly two decades ago by Lisa Lopez.

"We wanted to do this song to touch each public," she says.

With the production by Jose "Pepe" Quintana, Star de Azlan adds her own flavor to the track, and she has recorded it in the Mexican banda, grupera, ranchera and tejana styles.

"We had a back-up plan in case some didn't like one of the versions," she says, laughing. "We had all the genres covered. Jose Quintana did an amazing job; we brought this song back to life."

The "Si Quieres Verme Llorar" E.P. also includes two of her written works in "Como una Rosa" (Like a Rose) and "Desnudate" (Undress Yourself).

In her free time, Star de Azlan loves fishing, writing songs, and spending time with her family and dogs, among other things.

"I am very much looking forward to going deep sea fishing soon," she says with a smile.